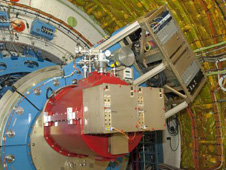 Later this fall, the SOFIA 747SP will take to the night sky for several flights to check the entire observatory system. This will be followed by a series of initial science flights by the airborne astronomical observatory.

The FORCAST instrument, developed by a team of scientists working under the direction of principal investigator Terry Herter of Cornell University, will remain on the SOFIA’s German-built telescope during the first flights when the flying observatory will begin its study of the universe.

Earlier this summer, the SOFIA 747SP completed envelope expansion flight tests for the modified aircraft. The aircraft was flown at varying altitudes, air speeds, telescope cavity door positions and telescope angles to verify the modifications made to the aircraft to allow it to operate with a telescope installed in the rear fuselage.

During 12 flights, engineers measured structural loads to ensure that the new bulkhead and cavity door system has acceptable design margins and to confirm that the open cavity door does not create excessive acoustic vibrations on the telescope or aircraft. In-flight maneuvers and landings verified that the SOFIA’s flying qualities do not change when the telescope cavity door is open during flight.