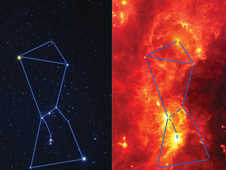 These visible light (left) and infrared (right) images of the constellation Orion are of the exact same area. These images dramatically illustrate how features that cannot be seen in visible light show up very brightly in the infrared. (Visible light: Akira Fujii; Infrared: Infrared Astronomical Satellite) SOFIA, NASA's Stratospheric Observatory for Infrared Astronomy, soared into the heavens for its first science flight Nov. 30.

A team led by Principal Investigator Terry Herter of Cornell University, Ithaca, N.Y. will use the Faint Object InfraRed Camera for the SOFIA Telescope (FORCAST) for SOFIA's first three science flights. Two astronomers from outside the SOFIA program, Mark Morris of the University of California at Los Angeles (UCLA), and Paul Harvey of the University of Colorado at Boulder, wrote winning proposals to work with the FORCAST group to investigate the details of how stars form.

"My primary target was the Orion nebula, which is a star formation factory," Morris said. "It's close and offers the best views of stars forming right before our very eyes."

Morris hopes to better understand the complexities of the star formation process by viewing the infrared energy emitted by warm dust in the interstellar clouds that are forming the stars. The dust is heated by the luminous, newborn stars.

"Nature doesn't form stars in isolation," he said. "It forms them in clusters, out of natal clouds that collapse under their own gravity. If you observe carefully, you start to get a clearer picture of how all the new stars are interacting with each other and with their environment."

Harvey's immediate goal was to use the unique combination of high image IR resolution available with SOFIA and FORCAST to study the distribution of dust and gas around Sharpless 140, a young, forming star cluster. Sharpless 140 lies almost 3,000 light-years from Earth in the constellation Cepheus.

"Observing the birth of stars in our own galaxy is critical, because planetary systems form at the same time that a central star is formed," Harvey said. "Some of the most luminous galaxies in the universe appear to be powered by extreme bursts of star formation." The FORCAST team, including Harvey, obtained sequences of images of the Sharpless 140 star cluster, moving the telescope slightly between each image in order to sample every pixel multiple times. 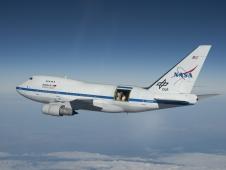 "We also plan to observe a calibration, point-like source to understand what an unresolved object looks like with the same observing technique," Harvey said. "That allows us to extract the fine details of the distribution of infrared radiation from the star cluster, and measure the luminosity of the individual stars in the cluster."

Both Morris and Harvey have flown on SOFIA's predecessor, the Kuiper Airborne Observatory, however neither will be aboard SOFIA's initial science flights due to space limitations. Instead, the two scientists will eagerly await the data gathered from FORCAST.

For information about SOFIA's science mission, visit: http://www.sofia.usra.edu and http://www.dlr.de/en/sofia