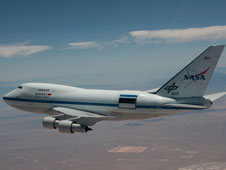 The lower flexible door (white) over the telescope cavity in the rear fuselage of NASA's Stratospheric Observatory for Infrared Astronomy is visible while the upper rigid door (with blue stripe) is opened during a test flight over the California high desert. (NASA photo / Jim Ross) The Stratospheric Observatory for Infrared Astronomy 747SP aircraft is currently flying the second segment of flight tests to prepare the observatory for Early Science missions. When completed, the SOFIA program will operate a fully capable observatory cleared for telescope cavity, door-open science instrument flights up to 45,000 feet.

The nine flights planned for June through August include evaluation of the performance, handling qualities and structural characteristics of the aircraft. Test data will be collected to quantify airframe and telescope cavity acoustic and vibration characteristics. Results of testing during these and subsequent flights will meet airworthiness requirements for the 747 flying observatory and its 20-year operational lifetime.