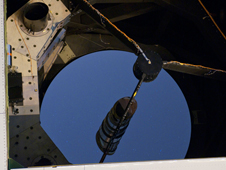 The airborne observatory obtained its first in-flight, nighttime celestial observations with a crew of 10 scientists, engineers and technicians from NASA, Universities Space Research Association (USRA), the German SOFIA Institute (DSI) and Cornell University, Ithaca, N.Y. aboard. The highly modified Boeing 747SP with the high-tech telescope took off from NASA's Dryden Aircraft Operations facility in Palmdale, Calif., at 9:44 p.m., Tuesday, May 25, for the nearly 8-hour flight before landing shortly before sunrise Wednesday.

Scientists are now processing the data gathered with the German-built 2.5-meter telescope and Cornell University's Faint Object infrared Camera for the SOFIA Telescope, also known as FORCAST. FORCAST is unique in that it records energy coming from space at infrared wavelengths between 5 and 40 microns – most of which cannot be seen by ground-based telescopes due to blockage by water vapor in Earth’s atmosphere.