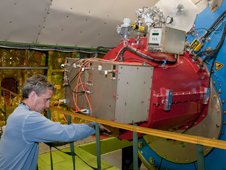 Cornell University mechanical engineer Chuck Henderson makes adjustments on the Faint Object Infrared Camera for the SOFIA Telescope (FORCAST) during line operations testing of the instrument May 20. FORCAST is the large red cylinder attached to the SOFIA telescope’s light tube. (NASA/Tom Tschida) The Stratospheric Observatory For Infrared Astronomy, or SOFIA, mission operations and science instrument teams are working nights in a dress rehearsal for the airborne observatory’s Telescope Assembly Characterization and 'First Light' flight. The 2.5-meter (100-inch) infrared telescope will be collecting its first celestial imagery during the mission, which could come as early as the last week of May.

The Cornell University team that developed the Faint Object Infrared Camera for the SOFIA Telescope (FORCAST) has traveled from New York to put their infrared camera through its paces. Working alongside NASA researchers and scientists from the German Aerospace Center DLR, the FORCAST team is coordinating how they will use the instrument and telescope in flight. FORCAST is unique in that it records energy coming from space at infrared wavelengths between 5 and 40 microns – most of which cannot be seen by ground-based telescopes due to blockage by water vapor in Earth’s atmosphere.

Beginning May 19 at sundown and continuing for four evenings, the SOFIA is positioned on the flight line adjacent to its hangar at NASA’s Dryden Aircraft Operations Facility in Palmdale, Calif., to observe a series of celestial objects. These procedures, known as “line operations,” provide the aircraft, telescope, and instrument teams the opportunity to work together, simulating, verifying and modifying procedures on the ground before astronomical science flight operations begin.

During the most recent line operations, the SOFIA’s telescope was pointed at Polaris, the North Star, and the planet Mars to enable the telescope team and the FORCAST scientists to check alignment and focus. It also helped verify performance of the telescope and instrument control software packages that have been integrated into the observatory. 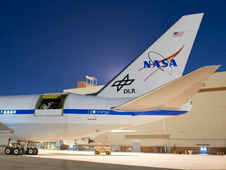 In this long-exposure image, the 2.5-meter infrared telescope peers out at a starry sky from its cavity in the rear fuselage of NASA's highly modified Stratospheric Observatory for Infrared Astronomy Boeing 747SP during line operations testing the night of May 20. The line operations tests at the Dryden Aircraft Operations Facility in Palmdale, Calif., enable the SOFIA aircraft, telescope, and FORCAST teams to prepare for the flying observatory’s upcoming 'first light' science flights. (NASA/Tom Tschida) FORCAST Line Ops were expected to continue through Saturday, May 22, but could be subject to weather delays.