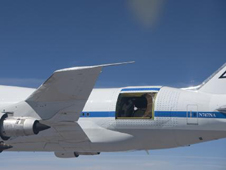 German SOFIA Institute (DSI) telescope operators Ulrich Lampater and Andreas Reinacher unlocked SOFIA's telescope assembly when the aircraft reached 35,000 feet in altitude, allowing the telescope to float on its hydraulic oil bearing. The uncaging and centering of the telescope worked as expected, even under the challenging open-door environment. The software system completed functional operations such as movement and pointing of the telescope.

With the cavity door fully open, SOFIA's 17-ton telescope pointed its visual-wavelength optical guidance cameras at and tracked celestial targets. With special red daylight filters in place, the cameras locked on Beta Leo, Saturn and Beta Ori, doing so within predicted accuracy limits. The primary mirror was covered to protect it from the sunlight and no infrared instrument was mounted on the telescope.

Cornell University's FORCAST instrument will be installed on the telescope this week. This will be followed by nighttime ground-based operations that will prepare the telescope and FORCAST to capture the first in-flight infrared observations.