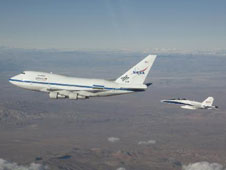 The telescope was unlocked by engineers from SOFIA’s German telescope partners, Deutsches SOFIA Institute, and allowed to "float" as it would during astronomical observations. The time required to lock and unlock the assembly during flight was greatly reduced from previous tests. The vibration isolation system was also monitored to determine if the assembly remained centered on its mount as the aircraft changed its altitude and heading.

Engineers monitored temperature changes to see how they affected operation and performance of the telescope assembly, including the secondary mirror mechanism. The temperature of the telescope components inside the cavity drops gradually while flying at altitude because the cavity is not sealed from the outside atmosphere. With the door closed, the telescope cavity did not become quite as cold during this flight as it will with the door open, but the flight provided an opportunity to watch how the temperature dropped, finally reaching –15 degrees Celsius (+5 degrees Fahrenheit), as the aircraft flew at 35,000 feet. Read more on SOFIA's telescope activation tests.

The flight Jan. 15 followed a check flight the preceding day when a number of aircraft functional tests were accomplished.