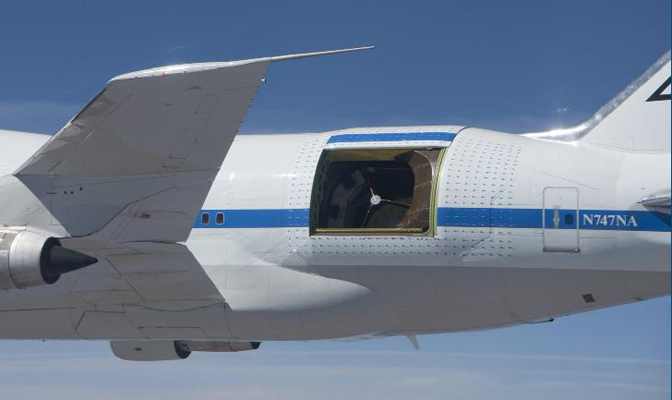 The Stratospheric Observatory for Infrared Astronomy (SOFIA), a joint program by NASA and the German Aerospace Center, achieved a major milestone May 26, with its first in-flight night observations.

"With this flight, SOFIA begins a 20-year journey that will enable a wide variety of astronomical science observations not possible from other Earth and space-borne observatories," said Jon Morse, Astrophysics Division director in the Science Mission Directorate at NASA Headquarters in Washington. "It clearly sets expectations that SOFIA will provide us with Great Observatory-class astronomical science."

The highly modified SOFIA Boeing 747SP jetliner fitted with a 100-inch diameter reflecting telescope took off from its home base at the Aircraft Operations Facility in Palmdale, Calif., of NASA's Dryden Flight Research Center. The in-flight personnel consisted of an international crew from NASA, the Universities Space Research Association in Columbia, Md., Cornell University and the German SOFIA Institute (DSI) in Stuttgart. During the nearly eight-hour flight, at altitudes up to 35,000 feet, the crew of 10 scientists, astronomers, engineers and technicians gathered telescope performance data at consoles in the aircraft's main cabin. 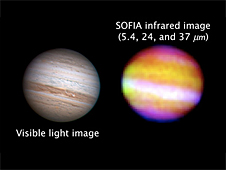 This composite infrared image of Jupiter was made by Cornell University’s FORCAST camera during the SOFIA observatory’s "first light" flight. A recent visual-wavelength picture of approximately the same side of Jupiter is shown for comparison. (Anthony Wesley) According to Bob Meyer, NASA's SOFIA program manager, the team has retired many of the risks and threats associated with this first light flight. "This was a major accomplishment in terms of understanding the quality of our observations, for example how much image instability we encounter with airflow over the telescope. While improvements can be made, we clearly exceeded expectations.”

"Wind tunnel tests and supercomputer calculations made at the start of the SOFIA program predicted we would have sharp enough images for front-line astronomical research," said SOFIA project scientist Pam Marcum of NASA's Ames Research Center in Moffett Field, Calif. "A preliminary look at the first light data indicates we indeed accomplished that."

The stability and precise pointing of the German-built telescope met or exceeded the expectations of the engineers and astronomers who put it through its paces during the flight.

The crowning achievement of the night: scientists recorded images of the Messier 82 (M82) galaxy and of Jupiter, at wavelengths unobservable by ground- or space-based telescopes. The composite image of Jupiter shows heat pouring out of the planet's interior through holes in its clouds. In the infrared image of M82, it is possible to look through the galaxy’s interstellar dust clouds to show several 'starburst' knots in which stars are forming by the tens of thousands. "It's tremendous for me personally to see these images; this feels like the culmination of my career," said USRA SOFIA Chief Science Advisor Eric Becklin. Becklin led the team that wrote the original proposal to NASA for the development and operation of SOFIA, and performed some of the first infrared observations of planets and galaxies in the 1960s.

"SOFIA combines the effectiveness of satellite-based telescopes with the relatively easy maintenance of ground-based observatories," said Alois Himmes, SOFIA Project Manager at DLR, summing up its advantages. "SOFIA is comparable to a space observatory that comes home every morning," explained Himmes. "At its maximum observation ceiling, SOFIA is above more than 99 percent of the water vapor in Earth's atmosphere, and so can receive a large part of cosmic infrared radiation which is otherwise absorbed by Earth's atmosphere," added Paul Hertz, chief scientist or NASA's Science Mission Directorate. 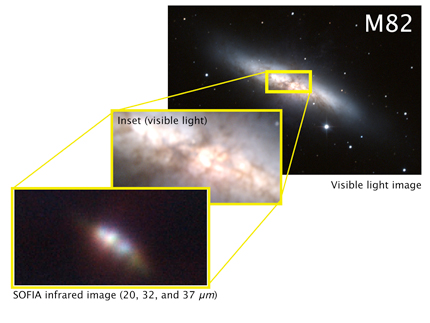 Composite infrared image of the central portion of galaxy M82, from SOFIA’s First Light flight, at wavelengths of 20 (blue), 32 (green) and 37 microns (red). The middle inset image shows the same portion of the galaxy at visual wavelengths. The infrared image sees past the stars and dust clouds apparent in the visible-wavelength image into the star-forming heart of the galaxy. The long dimension of the inset boxes is about 5400 light years. (N. A. Sharp/NOAO/AURA/NSF) The team that carried out the first light observations consisted of an international crew from NASA, the Universities Space Research Association (USRA) and the German SOFIA Institute (Deutsches SOFIA Institut; DSI). Also on board were Terry Herter and his colleagues from Cornell University in Ithaca, New York. They operated their Faint Object InfraRed CAmera for the SOFIA Telescope, FORCAST, for this first in-flight observation. "With FORCAST, within minutes, we can make observations that are either impossible from the surface of the Earth or can be obtained only after many hours of exposure," said Herter.

The telescope itself has exceeded expectations. "The image stability and precision of the telescope alignment, which can only be obtained through extensive control engineering, has met all our targets and even exceeded them in some respects. This is exceptional performance, especially when you recall that these astronomical observations have been made with a huge telescope mounted in an aircraft flying at 800 kilometers per hour," pointed Thomas Keilig, from DSI, SOFIA Telescope Assembly and SI Integration Manager, responsible for testing the telescope.

"A preliminary examination of the first light data shows that the images are in fact sharp enough to enable cutting-edge astronomy. Now at last, the fun begins," said Alfred Krabbe, Director and scientific head of DSI. USRA and DSI direct the scientific operation of SOFIA on behalf of NASA and DLR.

For Meyer, this successful first light flight is "the reward of many years of hard work. Hundreds of motivated and dedicated people have contributed to providing the international scientific community with this fantastic observation platform."

"For me personally, this is a dream come true after a wait of nearly 25 years," beams Hans-Peter Röser, Director of the Institute of Space Systems at the University of Stuttgart, where DSI is located. He has promoted German-American cooperation with SOFIA since 1985.

"This is an enormous step toward spectroscopic observations of the cold universe," added DSI Director Alfred Krabbe. "We are now awaiting forthcoming observations with GREAT, the German infrared spectrometer, under the leadership of Rolf Güsten at the Max Planck Institute for Radio Astronomy in Bonn." GREAT is the German REceiver for Astronomy at Terahertz Frequencies.

Erick Young, the SOFIA Science Mission Operations Director at USRA, added, "SOFIA's first light heralds a new era of astronomical discoveries. We stand at the threshold of a 20-year period of unprecedented infrared observations that will significantly expand our knowledge of the Universe."

Meyers added, “The German designed and built telescope has really worked well. It represents some of the great German engineering that we have come to appreciate over the years.”