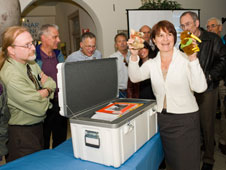 Wendy Dolci holds up two mascots from the Kuiper Airborne Observatory during the KAO time capsule opening ceremony on Nov. 10, 2010. The kiwi and koala were given by friends in New Zealand and Australia to the KAO crew members. It’s estimated that the koala mascot flew four million miles on the KAO. (NASA Photo / Eric James) Fifteen years after its final flight, veterans of the Kuiper Airborne Observatory, or KAO, gathered at NASA's Ames Research Center Nov. 10, 2010 to witness the opening of a time capsule.

The KAO is a highly modified Lockheed C-141A cargo transport fitted with a 36-inch telescope. The observatory was based at NASA's Ames Research Center in Moffett Field, Calif., for operations that began in 1974 and ended in 1995.

Wendy Dolci, associate director for operations at NASA Ames' Astrobiology Institute, served as mission director when the time capsule was assembled in 1995. Dolci wasn't certain what the group would find upon the capsule's opening, but she did remember a pair of mascots: a stuffed kiwi and a stuffed koala, given by friends from New Zealand and Australia. The koala was a constant companion of crewmembers, flying four million miles on the airborne observatory.

As the crowd waited, anticipation built and when the capsule was finally unlatched, it revealed an intact koala and kiwi, along with the rest of the items, which had been stored in an ice chest. A cricket bat signed by friends from New Zealand also was among the memorabilia.

Results from observations made with the KAO, including images of the comet Halley and super nova SN87A, were rediscovered. Diane Wooden, an Ames astrophysicist, was on board in April 1986 when those images were taken and recalled "how much fun it was." She flew on KAO missions for 16 of the 22 years the aircraft was in operation.

More practical items included a flight map from the final flight, meeting minutes, a guest book and a package of Lipton's Cup of Soup – "a typical Kuiper gourmet meal," recalled one of the former crewmembers. 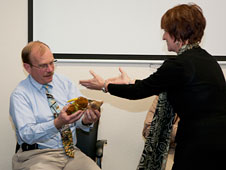 Wendy Dolci, former KAO mission director, presents SOFIA program manager Bob Meyer with two KAO mascots to be flown on SOFIA. (NASA Photo / Tom Tschida) Items of a less scientific nature included the lyrics to "The Kuiper Blues," along with a harmonica and a poem written by Tom Connors, a former mechanical engineer.

"We had a rich culture with the KAO," quipped Dolci.

On a humorous note, there was a penny-filled jar labeled, "Save the KAO Fund;" a "smile" lipstick sticker, for "when everything's wrong and you need to be pleasant;" and an alleged witch-doctor bone. The artifact had been acquired by KAO scientist Jim Elliot in Maseru Lesotho, South Africa, in 1971, and was used by Elliot and fellow scientists Ted Dunham and their collaborators to "ward off evil occultation spirits."

One item that KAO veterans recommended be passed on to KAO's successor, the Stratospheric Observatory for Infrared Astronomy, or SOFIA, crew was a talisman representing "the blame." Consisting of a simple feather bearing a message, it was bequeathed to SOFIA staff with the instructions that it "is to be used during times when things have gone wrong, awry, amok (yes, this will happen on SOFIA, too) and blame is being randomly cast about. Just take the blame and pin it on someone (it seems to work best when it's pinned on the person who is least to blame). Then, for the rest of the day, that person is blamed for everything." The blame talisman was one example of how scientists working long hours under pressure vented steam with humor.

That item was among several that Dolci brought to the Dryden Aircraft Operations Facility in Palmdale, Calif., to present to SOFIA program staff. Just after the crew briefing for the SOFIA's first dedicated science flight on Nov. 30, 2010, Dolci presented SOFIA program manager Bob Meyer with the kiwi and koala. Meyer passed the items along to Nancy McKown of the Universities Space Research Association, mission manager for the first series of SOFIA's science flights, to be carried on board the airborne observatory. The mascots, Meyer said, "need to go flying."

The tiny stuffed mascots brought some of the KAO's charm to SOFIA and, scientists hope, some KAO karma that will enable the SOFIA program to carry on the important and successful work of its predecessor.

The SOFIA team is off to a good start, with the help of the artifacts inherited from the KAO, three short science 1-series flights were completed Dec. 8, 2010, marking "a significant milestone in SOFIA's development and ability to conduct peer-reviewed science observations," said Meyer.