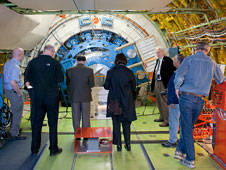 News media representatives are briefed on capabilities of the SOFIA's German-built infrared telescope embedded in the flying observatory's rear fuselage by USRA's chief SOFIA scientist Eric Becklin (white hair at right) in front of the bulkhead that supports the 17-ton telescope. (NASA photo / Tom Tschida) Scientists and technicians are preparing NASA's Stratospheric Observatory for Infrared Astronomy – or SOFIA – for a flight in late May when the world's largest airborne telescope will gather long-awaited "first light" infrared observations to validate and verify its astronomical science capabilities.

Media representatives had an opportunity to learn more about the airborne observatory April 20 at NASA's Dryden Aircraft Operations Facility in Palmdale, Calif., where the highly modified Boeing 747SP housing a 17-ton infrared telescope is based.

“Behind me is a near Hubble-class observatory here in California. It's pretty amazing. It will soon bring world-class scientists [to the program] and unlock some of the mysteries of the universe,” said Bob Meyer, NASA's SOFIA program manager.

The SOFIA is unique not only because it incorporates the world's largest infrared airborne telescope in its rear fuselage, but also because it will fly above more than 99 percent of the water vapor in Earth’s atmosphere, which obscures visibility for ground-based infrared telescopes. Researchers also will use the telescope to peer through space dust to reveal some secrets that will “open the infrared window to the universe,” Meyer added.

Because the SOFIA will take off and land from the ground, the latest science instruments can be used and substituted as they become available, unlike space telescopes that lack the same ease of access. 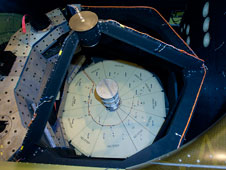 With a protective cover over its primary mirror, the high-tech German-built infrared telescope is nested in its framework inside the 19-foot-deep, 12-foot-wide telescope cavity in the rear fuselage of NASA's SOFIA flying observatory. (NASA photo / Tom Tschida) Erick Young, SOFIA science mission operations director for the Universities Space Research Association (USRA), said the SOFIA offers “an amazing amount of promise” because it will help scientists gather more information on astronomical objects that will be easier to study. For example, dust will no longer obscure information on processes such as star formation. In addition, the SOFIA telescope will be used to study the chemical nature of molecules.

“Trying to understand the nature of this star-formation process is very high on the intellectual questions list,” Young said. “We're very close to realizing a decades-long dream.”

The SOFIA airborne observatory is a joint venture of NASA and the German Aerospace Center DLR. NASA supplied the 747SP aircraft that houses the infrared telescope, which was designed and built in Germany. L-3 Communications Integrated Systems made the major modifications to the aircraft and installed the telescope under contract to NASA.

The program is managed at NASA Dryden, which installed and integrated mission systems and is conducting flight tests of the observatory. NASA's Ames Research Center at Moffett Field, Calif., jointly manages the program's science component with USRA and the Deutsches SOFIA Institut in Germany.