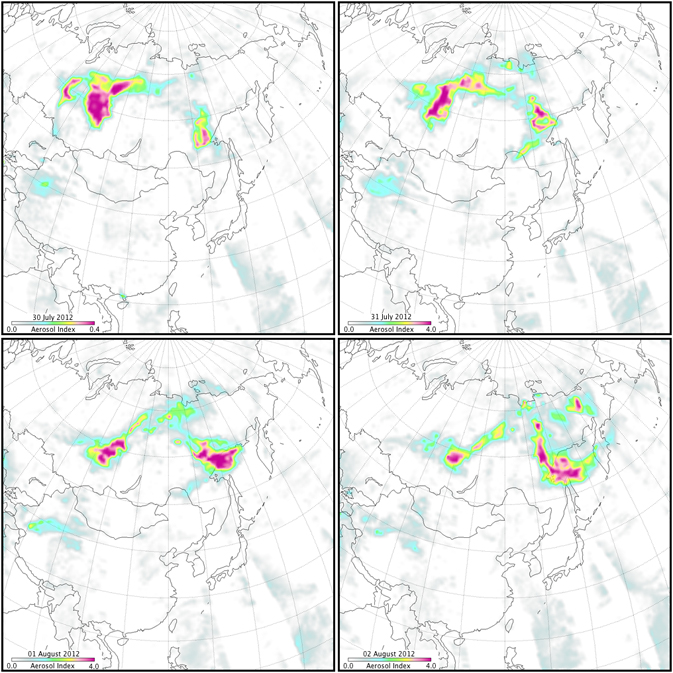 Fires burning in Russia in early August sent smoke plumes into the air. These images track a four day period. Suomi NPP satellite's Ozone Mapping Profiler Suite tracked aerosols from the fires. The smoke carried over from one fire to the other. These false-colored images make the data stand out. The blue and green colors represent less smoke. Yellows and pink represent more smoke. Credit: NASA/Suomi NPP/Colin Seftor
› Larger image
The satellite's Ozone Mapping Profiler Suite (OMPS) tracks the lofted smoke aerosols from the fires as winds move the plumes across the globe.

The four images show the merging of smoke from forest fires burning in central and eastern Russia over a four-day period. High temperatures and lightning are believed to be the cause of these fires.

In these false-color images, the magenta represents dense areas of smoke nearly directly over the two fires, while the yellow and blue areas show areas where the two smoke plumes are merging.

Over the four-day period shown in these images, some of the smoke is close enough to the ground to impact air quality.

The Russian state news agency RIA Novosti reported that Tomsk, a city with approximately the same population as Tucson, Ariz. has been shrouded in smoke, and hospitals prepared for an increase in patients affected by poor air quality. A Russian official quoted by the press agency United Press International said that levels of the air pollutant carbon monoxide were twice as high as the current standard. 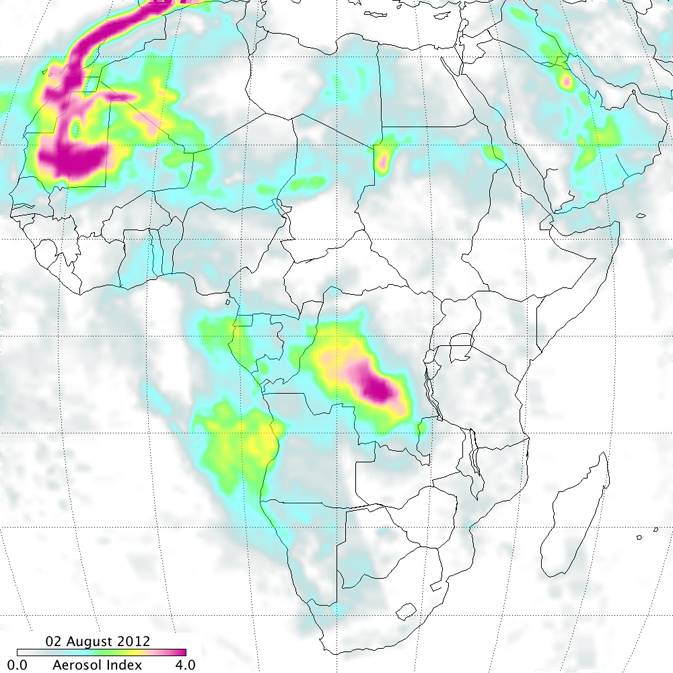 Fires burning in central Africa in early August sent smoke plumes to Spain. Dust was also seen along the northwest coast of Africa. Credit: NASA/Suomi NPP/Colin Seftor
› Larger image
In the above image, acquired on Aug. 2, 2012, hundreds of fires in central Africa sent up large amounts of smoke. Farmers set these fires to clear brush in preparation for Africa's growing season. In this image, Saharan dust can also be seen along the northwest coast of Africa. Smoke plumes from these central African fires reached southern Spain.

Smoke changes the Earth's solar radiation balance, which in turn, affects the amount of heat in the Earth system, says Seftor. "Smoke can also change how clouds interact with solar radiation (the balance between incoming and outgoing radiation to the earth)."

Smoke can affect the atmosphere in other ways as well. Long-lasting smoke plumes from the African fires can chemically react with other constituents in the atmosphere, producing ozone in the process, says Seftor.