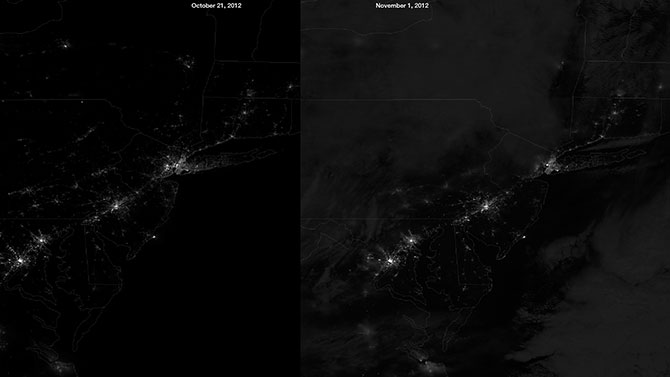 Caption: The NASA/NOAA Suomi NPP satellite's day/night band measures light emanating from the ground showing human settlements and industrial activity, and also moonlight reflected off of clouds. The image on the left was taken on October 21, 2012, an evening of a waxing crescent moon with little cloud cover over the northeastern US. The image on the right was taken in the early morning of November 1, 2012, two days after a full moon. Hurricane Sandy's impact on the region can be seen clearly by comparing these two images. Credit: NASA/NOAA/CIMSS, Univ. of Wisconsin
› Larger image
The Visible Infrared Imaging Radiometer Suite (VIIRS) on Suomi NPP captured a night-time view of the Mid-Atlantic on the morning of Nov. 1, 2012,revealing areas where power has not been currently restored. To fully understand the extent of how large an area was affected by the power outage, a comparison image taken on October 21, 2012, shows a much brighter New York City and eastern New Jersey.Power outages in the Philadelphia area can also be seen by comparing the two images.

Hurricane Sandy made landfall on the New Jersey coast during the night of Oct. 29 and left more than eight million people without electricity from Maine to SouthCarolina, and as far west as Ohio. Hardest hit were New York City and northeastern New Jersey as is evident in a comparison of Suomi NPP images before and after the storm. In north central New Jersey, routes 444 and 18 that begin near New Brunswick and extend southeast to the New Jersey shoreline both appear dark in the Nov. 1 image. In addition, the intensity of lights around the Trenton, N.J., area are much dimmer than they appeared in the Aug. 31 image.

The images were taken by a "day-night band," which detects light in a range of wavelengths from green to near-infrared and uses filtering techniques to observe dim signals such as auroras, air glow, gas flares, city lights, fires and reflected moonlight. Because there was a waning gibbous moon (93.1% illumination), this allowed clouds to be visible in Day Night Band image taken on Nov. 1, 2012.

NASA launched Suomi NPP on Oct. 28, 2011, from Vandenberg Air Force Base, Calif. One year later, Suomi NPP has orbited the Earth more than 5,000 times and is returning images and data that provide critical weather and climate measurements of complex Earth systems.

Suomi NPP observes Earth’s surface twice every 24-hour day, once in daylight and once at night. NPP flies 512 miles (824 kilometers) above the surface in a polar orbit, circling the planet about 14 times a day. NPP sends its data once an orbit to the ground station in Svalbard, Norway, and continuously to local direct broadcast users.