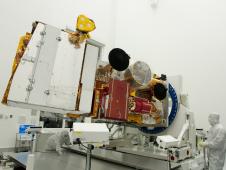 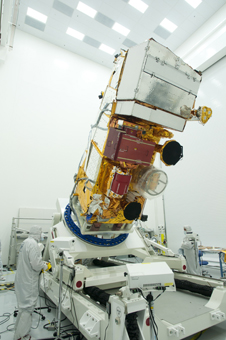 During the four-week NPP Compatibility Test 4 (NCT4), all segments of the ground system were assessed including active commanding of the satellite as well as monitoring the flow of both satellite health and safety and science data (both actual and simulated). NASA utilized two tracking and data networks in support of this mission test, the primary tracking antenna site located in Svalbard, Norway, and the Tacking and Data Relay Satellite System networks.

"The successful completion of this test has all of our NPP team members excited," stated Raymond J. Pages, the NPP Project Integration Manager. "It’s a major milestone that supports our readiness to launch in October."

The NCT4 also served as a high-fidelity operational “dress rehearsal” called Mission Rehearsal 3 (MR3), which simulated on-orbit operations beginning with the launch phase and continuing through instrument activation. The successful completion of NCT4 and MR3 signifies that all mission systems are ready to proceed to launch. Additional testing will be performed during the remaining two-and-a-half months prior to launch to maintain operational and system proficiency.

NPP contains a suite of five sensors that will make measurements to continue producing key data products about Earth including, for example, measurements of cloud, vegetation, and ice cover, ocean color, and sea and land surface temperatures.

Data from NPP will be used in a range of situations to address an array of research questions. Earth scientists will use the data to enhance their understanding of climate change. NOAA meteorologists will incorporate the data into their weather and climate prediction models to produce accurate, life-saving forecasts and warnings. Also NPP will help emergency responders monitor and react to natural disasters.

The NPP satellite is scheduled to be delivered to the Vandenberg Air Force Base in Lompoc, Calif., on August 24 to undergo final preparations for a planned October 25 launch.

NASA's Goddard Space Flight Center manages the NPP mission on behalf of the Earth Science Division of the Science Mission Directorate at NASA Headquarters, Washington. The JPSS program is providing the ground system for NPP. NOAA will provide operational support for the mission. Goddard Release No. 11-047