The doors are open on NASA's Suomi NPP satellite and the newest version of the Clouds and the Earth's Radiant Energy System (CERES) instrument is scanning Earth for the first time, helping to assure continued availability of measurements of the energy leaving the Earth-atmosphere system.

The CERES results help scientists to determine the Earth's energy balance, providing a long-term record of this crucial environmental parameter that will be consistent with those of its predecessors. 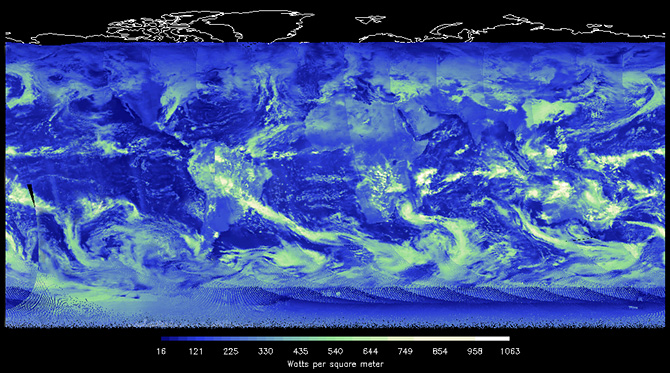 Thick cloud cover tends to reflect a large amount of incoming solar energy back to space (blue/green/white image), but at the same time, reduce the amount of outgoing heat lost to space (red/blue/orange image). Contrast the areas that do not have cloud cover (darker colored regions) to get a sense for how much impact the clouds have on incoming and outgoing energy. Credit: NASA/NOAA/CERES Team 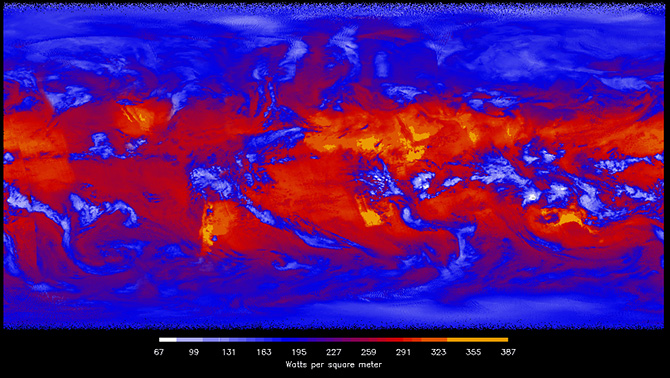 In the longwave image, heat energy radiated from Earth (in watts per square meter) is shown in shades of yellow, red, blue and white. The brightest-yellow areas are the hottest and are emitting the most energy out to space, while the dark blue areas and the bright white clouds are much colder, emitting the least energy. Increasing temperature, decreasing water vapor, and decreasing clouds will all tend to increase the ability of Earth to shed heat out to space. Credit: NASA/NOAA/CERES Team

CERES arrived in space Oct. 28, 2011, carried by NASA's newest Earth-observing satellite, the recently renamed Suomi National Polar-orbiting Partnership, or Suomi NPP. Suomi NPP is the result of a partnership between NASA, NOAA and the Department of Defense.

Instrument cover-opening activities began on the instrument at 10:12 a.m. Eastern time Jan. 26, an operation that took about three hours. The "first light" process represented the transition from engineering checkout to science observations. The next morning CERES began taking Earth-viewing data, and on Jan. 29 scientists produced an image from the scans.

"It has taken an incredible team of engineers, scientists, data management and programmatic experts to get CERES to this point," he said.

NASA instruments have provided the scientific community unprecedented observations of the Earth's climate and energy balance for nearly 30 years. The first CERES instrument was launched in 1997. Before that, the Earth Radiation Budget Experiment (ERBE) did the job beginning in 1984.

Langley Research Center has led both the ERBE and CERES experiments and provided stewardship of these critical climate observations.

For 27 years without a break, the instruments collectively have returned a vast quantity of precise data about the solar energy reflected and absorbed by Earth, the heat the planet emits, and the role of clouds in that process.

"Any imbalance in Earth's energy budget due to increasing concentrations of heat trapping gases warms the ocean, raises sea level, and causes increases in atmospheric temperature," Loeb said. "Amassing a long record of data is important in order to understand how Earth's climate is changing in response to human activities as well as natural processes."

"Clouds both reflect sunlight and block energy from radiating to space," Loeb said. "Which of these two effects dominates depends upon the properties of clouds, such as their amount, thickness and height."

"As the Earth's environment evolves, cloud properties may change in ways that could amplify or offset climate change driven by other processes. Understanding the influence of clouds on the energy budget is therefore a critical climate problem."

The four other CERES instruments are in orbit on NASA's Aqua and Terra satellites.