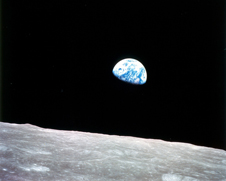 Earthrise photo taken by Apollo 8 astronauts in 1968. Credit: NASA
› Larger image On Christmas Eve in 1968, Apollo 8 astronauts orbiting the moon snapped an ethereal photo of our cloud-speckled blue planet rising over the lunar horizon with a hand-held camera.

The photo, known as Earthrise, was one of the first views of Earth from deep space. It’s widely credited with helping spur the global environmental movement that began to find its voice with the first Earth Day celebration on April 22, 1970.

More than four decades later, NASA’s view of Earth has grown far more sophisticated. Today, a fleet of satellites -- many of which are part of a project called the Earth Observing System (EOS) -- constantly monitor the oceans, land surfaces, and atmosphere.

In ways scarcely imaginable when Earthrise was taken, the EOS fleet has revolutionized understanding of how our planet works by helping pioneer an interdisciplinary approach to Earth science. This approach, called Earth systems sciences, focuses on understanding the many components of Earth as an interconnected system rather than as independent parts. In the process, the group of EOS satellites has collected information that has led to the publication of thousands of technical papers.


To extend and build upon this legacy, NASA plans to launch a new member of its Earth-observing fleet this fall called the NPOESS Preparatory Project. NPP, a minibus-sized satellite, will monitor a broad range of land, ocean, and atmospheric phenomena.

In addition to supporting weather forecasting, NPP will help preserve and extend a suite of long-term measurements critical to understanding climate that began with EOS satellites launched about a decade ago. NPP is also capable of monitoring a broad range of natural and manmade disasters and other types of global change. 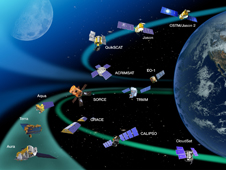 Over the last decade, the three EOS flagships – Terra, Aqua, and Aura – have produced a spectacular amount of information about the environmental conditions that make life on this planet possible. Terra -- the oldest -- launched in 1999, Aqua in 2002, and Aura in 2004.

Yet parsing out the extent to which these observed changes reflect long-term climate change caused by human activity – as opposed to fleeting fluctuations due to natural climate variations – remains a complex and thorny problem for scientists. To answer it, high-quality, global satellite records significantly longer than a decade are needed.


"The EOS satellites have built a spectacular foundation, but they won’t last indefinitely," said EOS Senior Project Scientist Steven Platnick. All three of the flagships have surpassed their six-year mission life spans. Terra is going into its 11th year on orbit, and certain instruments and pieces of hardware have started to degrade. Eventually, all three satellites will run out of fuel despite the resilience of their hardware.

"When you’re dealing with climate, by definition you’re working with long time scales," said NPP Deputy Project Scientist Christina Hsu, an aerosol specialist based at NASA's Goddard Space Flight Center, Greenbelt, Md. "We’ve started building a whole set of databases in the last decade, and gaps in them would prove huge obstacles to understanding what’s happening with the climate and why."

NPP, like its flagship predecessors, will be placed in an orbit that passes over the poles. The satellite will fly about 512 miles (824 kilometers) above the surface and complete about 14 orbits per day. A polar orbit makes it possible for NPP sensors to monitor all parts of the surface at least once per day. In contrast, geostationary satellites, which are primarily used to study changing weather patterns hour-by-hour, orbit high over the equator and cannot observe the poles or all sides of the planet.


Although some earlier NASA satellites have flown just one science sensor, NPP will carry five, similar to the EOS's Terra satellite. In all, NPP sensors will retrieve 24 key types of data about Earth including, for example, measurements of cloud and vegetation cover, ocean color, and sea and surface temperatures.

All of NPP's 24 data products will have some bearing on global change and climate science, but a subset of them will be used for short-term weather forecasting as well. Meteorologists will use four of the 24 data products – especially measures of the vertical distribution of moisture and heat in the atmosphere – to improve forecasts.

Two of the 24 data products relate to ozone, the colorless gas that shields the planet from harmful ultraviolet radiation and has declined in abundance over Antarctica in the last few decades. Such information will help scientists determine whether ozone depletion has reversed after ozone-depleting gases were regulated starting in 1989.

"While the original EOS flagships were primarily climate research satellites, NPP is more of a hybrid that will serve both climate scientists and meteorologists," said NPP Project Scientist James Gleason at NASA Goddard. "It stands as a bridge between EOS and the next generation of operational climate and weather satellites, which is called the Joint Polar Satellite System, or JPSS."


NPP will test a number of key instruments and data processing techniques that JPSS satellites will use in coming decades. The first of this new generation of satellites will launch no earlier than 2014. 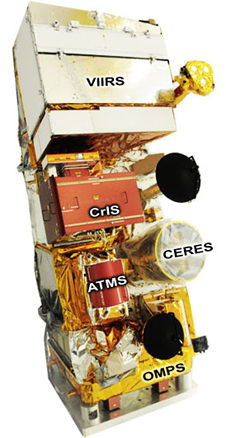 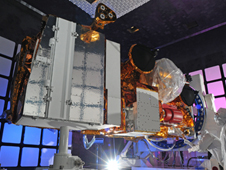 Of the five instruments on board NPP, the largest and most complex is an imager called the Visible Infrared Imaging Radiometer Suite, or VIIRS. The instrument, a follow-on to an earlier imager that flies on both Terra and Aqua, called the Moderate Resolution Imaging Spectroradiometer (MODIS), will monitor broad swaths of the land, oceans, and air.

VIIRS will provide data in 22 key parts of the electromagnetic spectrum, or bands, that will be used by scientists in a variety of disciplines. Atmospheric scientists, for example, will use certain bands to monitor clouds as well as small airborne particles called aerosols. Oceanographers, meanwhile, will use VIIRS to monitor phytoplankton and other organisms in the sea. Biologists will use it to monitor vegetation and forest cover, while ice experts will use it to track changes in the distribution of sea ice at the poles.

The other instruments are smaller and more specialized. The Ozone Mapper Profiler Suite (OMPS) will measure the total amount of ozone in the stratosphere and provide information about the distribution of ozone in lower parts of the atmosphere as well. The Clouds and Earth’s Radiant Energy System (CERES) sensor, a near clone of CERES instruments that currently fly on Terra and Aqua missions, will continue a record of the amount of energy entering and exiting the top of the atmosphere.

Data from all the instruments will be beamed once per orbit to an Arctic ground station in Svalbard, Norway and then distributed via fiber optic cables to data processing centers where much of it will available to meteorologists and climatologists within 180 minutes.

"Linking EOS and NPP data into long-term datasets won’t always be simple," cautioned Ralph Kahn, a climatologist based at NASA Goddard, referring to the complex calibration and data processing techniques that will be required when NPP begins to beam data back to Earth. "There's more work to be done, but NPP represents the next step for earth and climate science."