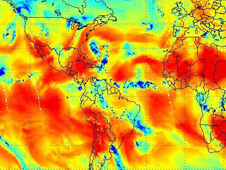 The ATMS is one of five instruments on board the National Polar-orbiting Operational Environmental Satellite System Preparatory Project, or NPP, that launched from Vandenberg Air Force Base, Calif., on October 28. Since then, NPP has successfully completed all spacecraft commissioning activities and powered on all instruments. In the next few weeks, all instruments will be commissioned and NPP will be sending science data from the four remaining instruments by mid-December.

A passive microwave radiometer, the ATMS instrument can collect data even when it is cloudy. Paired with the Cross-track Infrared Sounder (CrIS), also aboard NPP, they will produce global sets of high-resolution temperature and moisture profiles that are used for forecasting and studying weather.

"NPP is rock solid," stated Ken Schwer, NPP project manager at NASA's Goddard Space Flight Center, Greenbelt, Md. "The satellite has performed extremely well during the checkout maneuvers and is in the expert hands of the mission operations team at NSOF."

During the commissioning activities, which were completed November 5, the NPP spacecraft subsystems were successfully tested, including command and control, propulsion and communications. NPP spacecraft and instrument data is sent from the spacecraft to the ground station in Svalbard, Norway and then to the NSOF.

In addition to the ATMS and the CrIS instruments, NPP carries 3 more state-of-the-art sensors that will provide critical information concerning long-term climate patterns and will help meteorologists improve short-term weather forecasts. During the satellite's five-year life, the mission will extend more than 30 key long-term datasets NASA has been tracking, including measurements of the ozone layer, and land and ice cover.

"NPP data will improve our forecast skills out to 5 to 7 days in advance of extreme weather events, including hurricanes, and severe weather outbreaks," said Dr. Louis Uccellini, director of NOAA's National Centers for Environmental Prediction. "With NPP, our goal is to make the accurate forecasts achieved for this year’s events even better in the future."

The NPP mission is managed by NASA's Goddard Space Flight Center in Greenbelt, Md., for the Earth Science Division of the Science Mission Directorate at NASA Headquarters in Washington. The Joint Polar Satellite System program provides the NPP ground system. NOAA will provide operational support for the mission. Goddard Release No. 11-073