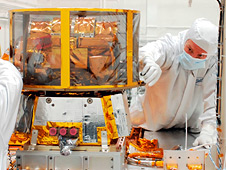 In October when NASA launches its next-generation Earth-observing satellite, NPP (NPOESS Preparatory Project), one of the passengers aboard will be the latest in a series of instruments that has studied the Earth's climate for nearly 30 years.

The first Clouds and the Earth's Radiant Energy System (CERES) instrument launched in 1997. Before that, the job was done by the Earth Radiation Budget Experiment (ERBE) beginning in 1984.

For 27 years without a break, the instruments collectively have returned a vast amount of data about the solar energy reflected and absorbed by Earth, the heat the planet emits, and the role of clouds in that process.

Amassing a long record of data is important because CERES monitors minute changes in the Earth's energy budget - the balance between incoming and outgoing energy - that can lead to serious longer-term consequences, such as polar ice melting and rising sea levels, said Loeb.

Scientists are studying the planetary energy balance that results from these interactions primarily because the Earth's atmosphere is influenced by the buildup of human-released carbon dioxide and other greenhouse gases. 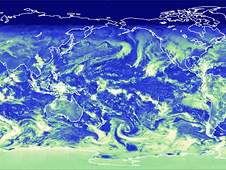 "Clouds both reflect sunlight and block energy from radiating to space," Loeb said. "Which of these two dominates depends upon the properties of clouds, such as their amount, thickness and height."

"As the Earth undergoes changes in its climate, cloud properties may change in ways that may amplify or offset climate change. Understanding the influence of clouds on the energy budget is therefore a critical climate problem."

The four other CERES instruments are in orbit aboard NASA's Aqua and Terra satellites. The instruments use a radiometer to measure the power of electromagnetic radiation being transmitted in the atmosphere.

All the radiometers on the CERES instruments are essentially the same, are well calibrated and produce comparable data - and that's critical, said Mark Folkman, director of sensor products for Northrop Grumman Aerospace Systems, which made CERES.

"Because scientists need to measure minute changes in the Earth's radiance over decades, CERES provides the absolute radiometric accuracy that is essential to monitoring the temperature of our planet," he said.

"If the instrument calibration were to change over these long timeframes, scientists might draw the wrong conclusions about the Earth's environment," Folkman added. "For more than 25 years, CERES has generated the accurate, long-term measurements that are essential to providing a true picture of the Earth's radiation balance, a critical element of the climate system."

This fall, the climate-monitoring torch is being passed to NASA's NPP, a satellite carrying the fifth edition of CERES. The spacecraft, carrying four other Earth-observing instruments, is scheduled for launch into a polar orbit Oct. 25 from Vandenberg Air Force Base in California on a Boeing Delta II-7920-10 launch vehicle.