On Tuesday, Aug. 30, NASA's next earth-observing research satellite arrived at Vandenberg Air Force Base in California to begin preparations for an October launch.

The National Polar-orbiting Operational Environmental Satellite System Preparatory Project (NPP) is the first of a new generation of satellites that will observe many facets of our changing Earth. 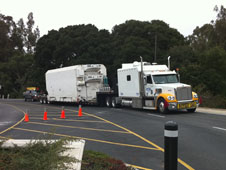 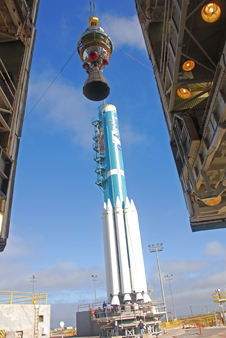 The second stage is being hoisted up onto the United Launch Alliance Delta II rocket that will launch NPP into orbit in October.Credit: NASA/Vandenberg Air Force Base
› Larger image The satellite will collect critical data to improve our understanding of long-term climate change and short-term weather conditions. With NPP, NASA continues many key data records initiated by the agency's Earth Observing System satellites by monitoring changes occurring in the atmosphere, oceans, vegetation, ice and solid Earth.

On Aug. 28, NPP was placed in a shipping container and loaded on a transport truck at Ball Aerospace & Technologies Corp. in Boulder, Colo. After Tuesday's arrival, the satellite was unloaded and moved into the clean room at the AstroTech facility for launch preparation.

"The NPP team has produced an outstanding satellite and kept to schedule over the past year and a half," said Ken Schwer, NPP project manager at NASA's Goddard Space Flight Center in Greenbelt, Md. "The world is looking forward to NPP's scientific measurements."

The NPP spacecraft will undergo prelaunch processing at Vandenberg, including a solar array functional test; a spacecraft limited performance test; and testing of the science instruments. Following these tests and a spacecraft launch simulation, the satellite will be fueled with its attitude control propellant.

The NPP spacecraft is scheduled to move to the pad and be mated with the rocket on Oct. 7. Launch is scheduled for Oct. 25 during a 9-minute and 10-second launch window from 5:48:01 to 5:57:11 a.m. EDT. The Delta II will place the satellite into a 512-mile high circular polar orbit.

NPP is the first satellite mission to address the challenge of acquiring a wide range of land, ocean, and atmospheric measurements for Earth system science while simultaneously preparing to address operational requirements for weather forecasting.

NPP will carry five science instruments and test key technologies for the JPSS missions. Data from NPP will help scientists ensure a continuous record of environmental satellite data and also contribute to weather forecasting efforts. NOAA meteorologists will incorporate NPP data into their weather prediction models to produce accurate forecasts and warnings that will help emergency responders monitor and react to natural disasters.

Goddard manages the NPP mission on behalf of the Earth Science Division of the Science Mission Directorate at NASA Headquarters in Washington. The JPSS program is providing the ground system for NPP. NOAA will provide operational support for the mission. Launch management is the responsibility of the NASA Launch Services Program at the Kennedy Space Center in Florida. Cynthia O'Carroll
NASA's Goddard Space Flight Center, Greenbelt, Md.