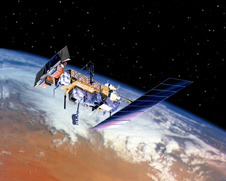 NOAA-N Prime is scheduled to lift off from Vandenberg Air Force Base in California, and will be renamed NOAA-19 after achieving proper orbit.

As it orbits Earth, NOAA-N Prime will collect data about Earth’s surface and atmosphere, which are vital inputs to NOAA's long-range Earth weather and climate outlooks, including forecasts for El Niño and La Niña.

NOAA-N Prime has imaging and sounding capabilities that are broadcast around the world and recorded on board for playback over the NOAA and European Organisation for the Exploitation of Meteorological Satellite ground stations. Space weather instruments provide data useful for warnings of solar winds that may impair communications, damage satellites and power systems, and affect astronaut safety.

NOAA polar-orbiting satellites have collected data for most of the past 50 years, enabling scientists and researchers to accumulate a very extensive picture of climate change. A stunning library of climate data has been gathered to aid in environmental studies, such as climate change studies, vegetation monitoring, biomass burning, El Niño, pollution and sea ice tracking. Scientists need this long-term data if they are to reach a clearer understanding of the interactions among Earth’s many systems. Polar-orbiting satellites provide both near and long-range weather forecasting information and data for global change research. Operating as a pair, two satellites ensure that data for any region of Earth is no more than six-hours old.

NOAA-N Prime has instruments to support the Search and Rescue Satellite Aided Tracking System, or SARSAT, which is part of the international satellite system, including the Russian provided satellites called COSPAS. Since SARSAT was established in 1982, NOAA polar-orbiting satellites have been detecting emergency distress beacons sent by aviators, mariners and individuals in remote locations and relaying them to ground stations so that rescue teams may be dispatched. More than 24,500 lives have been saved through the satellite-based search and rescue system to date.

NOAA polar-orbiting satellites help to carry forth the United States' commitment to systematic, global weather observation and provide total global coverage four times a day. The mission supports growing international cooperation in space; the spacecraft instrument suite provides data supporting requirements of 140 nations, and several instruments are provided by foreign nations. All nations can access NOAA spacecraft data and for many, NOAA data is their sole weather forecasting reference. In addition to weather observations, the search and rescue component of the program makes major contributions toward international search and rescue operations.

NOAA-N Prime is the 16th and last satellite in this series of polar-orbiting satellites. A new generation of environmental satellites called the National Polar-orbiting Operational Environmental Satellite System, or NPOESS, will become operational after the Polar Operational Environmental Satellites, or POES, complete their mission. NPOESS is a tri-agency program with NOAA, the Department of Defense and NASA. NPOESS will provide more capable sensors for improved data collection and better weather forecasts beginning in 2013.

NOAA manages the polar-orbiting satellites, establishes requirements, provides all funding and distributes environmental satellite data for the U.S. NASA's Goddard Space Flight Center in Greenbelt, Md., procures and manages the development and launch of the satellites for NOAA on a cost-reimbursable basis.