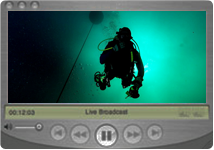 Watch the live feed from the Aquarius Reef Base USTREAM channel! 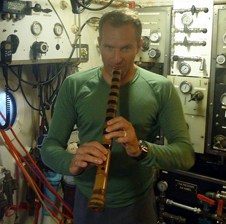 During NEEMO missions, aquanauts employ a technique known as saturation diving to live and work in the Aquarius underwater habitat for weeks at a time. Aquarius is an ambient pressure habitat, meaning its atmospheric pressure is equal to the surrounding water pressure — about 2.5 times that of surface level at the habitat’s depth.

The Aquarius habitat offers a unique learning environment for students. Educators and scientists from NASA, the European Space Agency (ESA) and the Japan Aerospace Exploration Agency (JAXA) proposed science experiments that evaluate whether simple, everyday tasks, such as blowing a bubble or operating a remote controlled device, will be more difficult at a higher pressure environment. These experiments encourage followers to use the scientific method to evaluate and predict results and the unique environment provides a new place to perform these simple tasks.

During the NEEMO 16 Expedition, the topside (“surface”) team and the aquanauts will perform and record these science experiments. Once the experiment of the day has been announced, NEEMO fans are invited to predict the outcome of each experiment. Followers should focus on whether the experiment will yield different outcomes at the surface-level environment vs. the increased pressure environment of the Aquarius habitat.

From June 14-21, look for science experiment announcements on any of the following social media outlets:


Here’s how to compete in the challenge:

The following topics will be addressed in the experiments: