Watch live feeds from the aquanauts' helmets, the Aquarius main lock, the exterior of the habitat, and more!

Learn about the teams, activities and research from previous NEEMO missions. 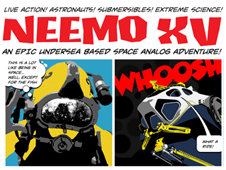 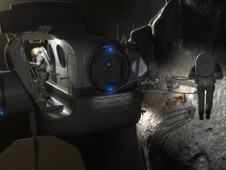 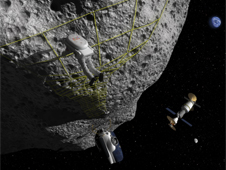 Exploration techniques proposed for Near Earth Asteroids (NEAs) such as extra-vehicular activity (EVA) translation lines will be tested during the NEEMO 15 mission in October 2011. Image credit: NASA

NASA sent a team of engineers, scientists and astronauts to the Aquarius Reef Base off Florida's east coast in October 2011, for NEEMO 15 - the 15th mission of the NASA Extreme Environment Mission Operations (NEEMO) program - to conduct tests of asteroid exploration concepts.

Engineering tests for NEEMO 15 were conducted May 9-13, 2011, at the Aquarius laboratory. The NEEMO support team performed surface dives to configure and lay out test sites, including a rock wall. All communication systems were tested and preparations made for the main October mission.

The primary objective of the 13-day mission is the testing of techniques, operational methods, tools, and communications protocols that have been recently developed for human exploration of near-Earth asteroids (NEAs) in a simulated microgravity environment. NASA engineers and scientists will work with the University of North Carolina at Wilmington (UNCW) staff, who operate the Aquarius Reef Base on behalf of the National Oceanic and Atmospheric Administration (NOAA), as part of NOAA's Undersea Research Program. The NEEMO missions are a cooperative project among NASA, NOAA and UNCW.

NEEMO 15 is an end-to-end simulation of a human exploration mission to a near-Earth asteroid. The mission began two months ago, with a robotic precursor mapping expedition of the coral reefs surrounding the Aquarius underwater habitat. The robotic precursor will be followed by humans piloting DeepWorker submersibles, who will perform detailed observations and sample site selection, analogous to the "near-field survey" that would be performed at a NEA by astronauts using the Multi-Mission Space Exploration Vehicle (MMSEV). The final phase of the NEEMO mission will involve the DeepWorker submersibles interacting with the aquanaut crewmembers to evaluate operational methods, tools and protocols for sample collection and instrument deployment tasks in the weightless underwater environment.

In addition to engineering and operations assessments, NEEMO 15 will also involve a multi-disciplinary team of marine and aquatic scientists from NASA, NOAA and academia. The NEEMO science team will map and explore the coral reef around Aquarius to conduct real marine science. In support of these science activities, the team will use operational techniques and protocols that will have a direct bearing on how we plan for future human space exploration missions. Many of these operations systems have been developed and honed by the Pavilion Lake Research Project (PLRP), and will now be applied, refined and evolved during NEEMO 15.

The NEEMO science mission began approximately 2 months ago when a University of Delaware autonomous underwater vehicle (AUV) was used to systematically map the coral reef for hundreds of meters surrounding the Aquarius habitat. This activity is akin to the type of "far-field survey" approach that might be used by a robotic precursor, in advance of a human mission to a NEA. Data from the far-field survey was then examined by the NEEMO science team and follow-up exploration traverses were planned which will use the same DeepWorker single-person submersibles used by the Pavilion Lake Research Project (PLRP) to conduct scientific exploration and documentation of microbialites in freshwater lakes. Traverse planning and data curation software developed by NASA Ames engineers has been refined during previous PLRP field seasons. These protocols will also be used by the NEEMO science team. Science traverses at NEEMO 15 were planned according to a prioritized list of scientific objectives developed by the science team, based on review and discussion of previous related marine science research, including previous marine science saturation missions conducted at the Aquarius habitat.

The DeepWorker science traverses will be executed during four days of the NEEMO 15 mission and will provide the opportunity to selectively validate the autonomous underwater vehicle data and provide higher resolution data on, for example, coral species distribution and mortality. These traverses are analogous to the "near-field survey" approach that is expected to be performed by a Space Exploration Vehicle during a human mission to a near-Earth asteroid, prior to conducting spacewalks. In addition to the science objectives that will be pursued, the NEEMO 15 science traverses will provide an opportunity to test the software and techniques that have been developed.

DeepWorker submersibles and the Aquarius underwater habitat will be used as analogs for the Multi-Mission Space Exploration Vehicle and Deep Space Habitat. Images credit: NASA

In a human near-Earth asteroid mission, following the "near-field survey," the crew would collect samples and deploy instruments on the asteroid surface. Although the NEEMO 15 science objectives do not require collecting samples, the engineering and operations objectives do require evaluating different combinations of vehicles, crew members, tools, and equipment that could be used to perform these tasks on a near-Earth asteroid. Specifically, the productivity and acceptability of simulated asteroid exploration activities will be systematically quantified and compared when operating with different combinations of crew sizes and exploration systems including Space Exploration Vehicles, Simplified Aid for EVA Rescue (SAFER)-style jet packs, and extra-vehicular activity (EVA) translation devices. 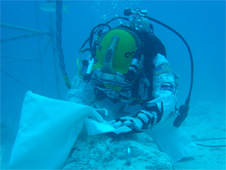 Aquanauts will be weighed-out to NEA-gravity and test concepts for EVA tools and translation devices. Photo credit: NASA

The NEEMO 15 mission will not attempt to evaluate near-Earth asteroid anchoring technologies due to the immaturity of those technologies and the inability to meaningfully test them during NEEMO 15. Instead, a consistent approach to anchoring that is specific to the NEEMO environment will be used during exploration scenarios, the number of anchorings will be recorded, and post-test analysis will parametrically evaluate the productivity of different exploration techniques as a function of anchoring time. Similarly, data from NEEMO 15 will be used in conjunction with data from software simulations, parametric analysis, other analog field tests, anchoring models, and integrated testing at Johnson Space Center to inform the evolving architectures and exploration systems being developed by the Human Spaceflight Architecture Team.

A detailed test protocol and timeline for the NEEMO 15 mission was developed by the Exploration Analogs & Mission Development (EAMD) project and peer-reviewed by more than a dozen scientists, engineers and astronauts. EAMD is chartered to develop detailed EVA operations analysis for exploration architectures and to ensure a rigorous approach and the use of consistent operational products, tools, methods and metrics across all NASA analog activities enabling iterative development, testing, analysis, and validation of exploration ops concepts and systems.

EAMD's role in integrating across analog environments means that the limitations of any one analog environment are often mitigated by conducting complementary analog testing in another analog environment, with different strengths and limitations. The feasibility and productivity of specific aspects of asteroid surface exploration techniques, and of combinations of exploration work systems, will be evaluated in the reduced gravity simulation of NEEMO. These evaluations will use underwater spacewalks (crewmembers wear a spacesuit simulator and SuperLite dive helmets, weighed out to microgravity) and DeepWorker submersible vehicles as an analog to Space Exploration Vehicles.

NEEMO 15 crew members will test the efficiency of the following operations:

› Back to the NEEMO home page