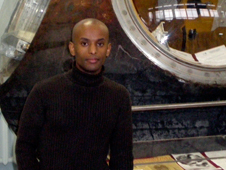 Lealem Mulugeta is a Project Engineer with the NASA Digital Astronaut Project (DAP) and an Education and Public Outreach Officer.

Lealem Mulugeta holds a Bachelor of Science in Mechanical Engineering (Aerospace focus) from University of Manitoba, and a Master of Science from the International Space University. He currently works as a Project Engineer with the NASA Digital Astronaut Project (DAP) supporting NASA researchers to develop and implement the Digital Astronaut computational physiology model to study the influence of spaceflight on astronaut health.

Prior to joining the DAP, Lealem interned with the NASA EVA (Extra-Vehicular Activities) Physiology Systems and Performance Project to analyze data from previous NEEMO missions regarding the influence of center of gravity and anthropometrics (body proportion) on human performance in simulated lunar and Mars gravity. Lealem’s role on NEEMO 14 will be to provide topside mission support for exploration related objectives including documenting data, cataloging photography, and coordinating with the mission support team in day-to-day operations.

Before his work at NASA, Lealem was a Design Engineer at Magellan Bristol Aerospace where he contributed to the design and development of the CASSIOPE satellite for the Canadian Space Agency. In addition, while completing his engineering degree, Lealem spent several years conducting ground-based research to prepare for microgravity materials processing experiments aboard the International Space Station. He also worked with the Mars Society of Canada for a number of years as a participant and director of a Mars analog research and training program.

Lealem plans to further advance his knowledge and expertise in human spaceflight by pursuing additional graduate studies in space life sciences. His current areas of interest include the use of physical responses to measure psychological stress, and the influence of physical stress on behavioral performance of astronauts on long-duration missions.
Find this article at:http://www.nasa.gov/mission_pages/NEEMO/NEEMO14/mulugeta_bio.html