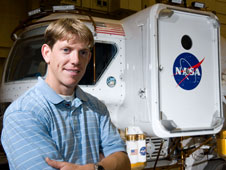 Dr. Andrew Abercromby will serve as a member of the NASA Extreme Environment Mission Operations 14 (NEEMO 14) crew. Andrew has more than nine years of experience working in the Space Life Sciences and Engineering Directorates at NASA's Johnson Space Center in Houston.

Growing up in a fishing village in Scotland, Andrew played a lot of soccer (he still calls it football), some rugby and even a bit of cricket during the brief Scottish summers. But he didn't spend much time thinking about space exploration. That changed at school one day when he was offered the chance to fly to America and join an International Space School at NASA's Johnson Space Center. Having never even been on an airplane before, just the chance to fly anywhere was exciting, but after spending two weeks at NASA Andrew knew what he wanted to do with the rest of his life.

The 9 hour flight from America to Scotland is not as enjoyable as it was that first time, but for Andrew the irresistible pull of space exploration has not diminished. After leaving high school Andrew studied engineering at the University of Edinburgh while trying to figure out a way to be a part of earth's space exploration team and maybe even fly in space himself one day. And after a lot of studying, part-time jobs, some pilot training with the reserves of the Royal Air Force, more studying, and a generous dose of good fortune, Andrew now considers himself to have one of the best jobs going.

As a biomedical engineer and deputy project manager for the Flexible Ranging Exploration Device (FRED) project Andrew is part of a team that is designing and testing a new type of human space exploration vehicle. Andrew is also a member of the Extravehicular Activity (EVA) Physiology, Systems and Performance project, which is helping develop new spacesuits that will be safer, more efficient, and easier to use. Andrew has also enjoyed the privilege of working in NASA's Neurosciences Laboratory, Anthropometry and Biomechanics Facility, and Flight Mechanics Laboratory.

Andrew has been fortunate to work on analog projects from the cold of the High Arctic to the heat of the Arizona desert and from the heights of reduced-gravity research aircraft to the depths of a remote Canadian lake. In addition to the important information that will be gained through the many experiments and evaluations planned for the NEEMO 14 mission, Andrew expects to learn a lot about himself by living and working as part of an underwater team for two weeks. He expects it to be a lot of work but plans on enjoying the unique experience.
› Back To Top