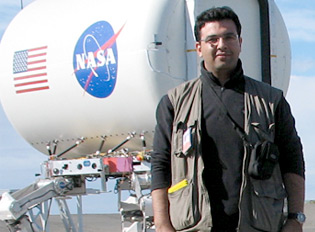 Where did you grow up? Where do you live now? I was born and raised in different parts of the world, from North Africa to France. I currently reside in Pasadena, California.

How did you get interested in space exploration? Being born in a small oasis in the desert, I always wanted to learn how to explore water and understand why stars are so shiny in the clear desert night sky. The combination of those two childhood dreams led me to participate in the hunt for water and volatiles on the moon, Mars and other objects of the solar system.

What are your hobbies? Reading, traveling and cooking.

What’s your job on Mini-RF? I perform laboratory dielectric measurement of ice-lunar dust analog mixtures to understand the dielectric signature of ice in the regolith.

What has been the most exciting aspect of working on Mini-RF?  Understanding the dielectric signature of volatiles in the lunar regolith under the different wave parameters: attempting to uniquely identify and resolve ice using polarimetric signatures.

What are you looking forward to the most as Mini-RF begins its lunar exploration? Understanding the potential distribution and volume of ice in the lunar polar regions as potential in-situ resource for long term human exploration.

What excites you about exploring the Moon? The moon is the nearest celestial body to Earth; it is hence an inevitable stop to better explore further planetary environments with larger and longer missions that will potentially bring more answers to our questions about the formation and evolution of our the solar system. Hopefully the moon will be the starting point for our future manned missions to Mars and further.

What advice would you give to someone who wants to get involved in space exploration? Space exploration is an impressive professional adventure that changed many of the scientific, social and philosophical standards of humans. Those changes were only possible because people who made them believed in their dreams and have seen in every difficulty an opportunity to do better. If you want to get involved in space exploration, be dedicated and passionate, and believe that we can never fully understand our planet until we explore the nearby planetary environments.