The Mini-RF project launched two radar instruments to the moon to map the lunar poles, search for water ice, and to demonstrate future NASA communication technologies. The first instrument, launched on the Indian Space Research Organisation’s (ISRO’s) Chandrayaan-1 spacecraft, concentrated on mapping both polar regions. The second instrument is currently flying on NASA’s Lunar Reconnaissance Orbiter (LRO) and has been mapping the different geologic units of the lunar surface.

Chandrayaan-1 was India’s first mission to the moon. It consisted of an orbiter that mapped the moon, initially from a 100-kilometer circular polar orbit. It carried 11 instruments, including Mini-SAR. It launched in October 2008; the mission ended in August 2009.

NASA’s LRO was built at Goddard Space Flight Center in Maryland. Launched in June 2009, LRO is carrying seven instruments and is currently mapping the moon from a 50-kilometer circular polar orbit. 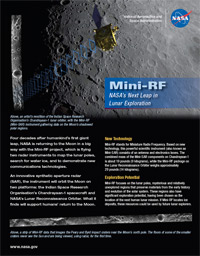 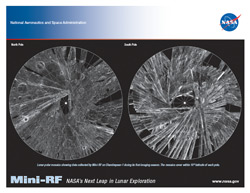 Mini-RF Lithograph (PDF)
› Back To Top