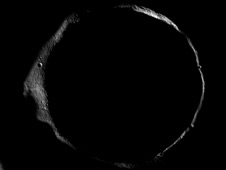 WASHINGTON – On Aug. 20, 2009 NASA and the Indian Space Research Organization (ISRO) will attempt a novel joint experiment that could yield more information on whether ice exists in a permanently shadowed crater near the north pole of the moon. Currently the ISRO’s Chandrayaan-1 and NASA’s Lunar Reconnaissance Orbiter (LRO) spacecraft are orbiting the moon.  While LRO is in its commissioning phase the two spacecraft pass close enough to each other when they are over the lunar north pole to attempt a unique experiment.  Both spacecraft are equipped with a NASA Miniature Radio Frequency (RF) instrument that functions as a Synthetic Aperture Radar (SAR), known as Mini-SAR on Chandrayaan-1 and Mini-RF on LRO.  The experiment uses both radars to point at Erlanger Crater at the same time.

Normally the Mini-RF Instrument sends radio pulses to the moon and precisely records the radio echoes that bounce straight back from the surface, along with their timing and frequency.  From these data scientists can build images of the moon that not only show areas they otherwise couldn’t see, such as the permanently-shadowed areas near the lunar poles, but also contain information on the physical nature of the surface.

For the Bi-Static experiment the Mini-SAR on Chandrayaan-1 performs its normal SAR imaging (transmitting and receiving) while the Mini-RF is set to receive only.  The two instruments look at the same location from different angles.  Comparing the signal that bounces straight back to Chandrayaan with the signal that bounces at a slight angle to LRO provides unique information about the surface. 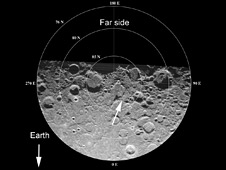 Stewart Nozette, Mini-RF principal investigator from the Universities Space Research Association’s Lunar and Planetary Institute, said, “An extraordinary effort was made by the whole NASA team working with ISRO to make this happen”

While this coordination sounds easy, this experiment is extremely challenging because both spacecraft are traveling at about 1.6 km per second and will be looking at an area on the ground about 18 km across.  Due to the extreme speeds and the small point of interest, NASA and ISRO need to obtain and share information about the location and pointing of both spacecraft.  The Bi-Static experiment requires extensive tracking by ground stations of NASA’s Deep Space Network, the Applied Physics Laboratory, and ISRO.

Even with the considerable planning and coordination between the U.S. and India the two instrument beams may not overlap, or may miss the desired location.  Even without hitting the exact location Scientists may still be able to use the Bi-Static information to further knowledge already received from both instruments.

“The international coordination and cooperation between the two agencies for this experiment is an excellent opportunity to demonstrate future cooperation between NASA and ISRO, “says Jason Crusan, program executive for the Mini-RF program, from NASA’s Space Operations Mission Directorate, Washington, D.C. 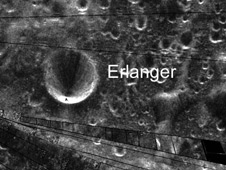 ISRO/NASA/JHUAPL/LPI - Mosaic of Mini-SAR image strips of the north polar area, showing the crater Erlanger, just south of the crater Peary. North Pole is in the direction of left top, out of frame. Mini-SAR radar image, Chandrayaan-1 mission.

“In the last few years we have seen a renaissance in international interest and cooperation in the study of the moon” says Gordon Johnson, program executive for the LRO, from NASA’s Exploration Systems Mission Directorate, Washington, D.C.  “As LRO completes its commissioning phase, we look forward to LRO’s contribution to this international effort.”

LRO was launched June 18, 2009. Its objectives are to scout for safe landing sites, locate potential resources, characterize the radiation environment, and demonstrate new technology. NASA’s Goddard Space Flight Center in Greenbelt, Md. built and manages the mission for NASA’S Exploration Systems Mission Directorate in Washington. LRO is a NASA mission with international participation from the Institute for Space Research in Moscow. Russia provides the neutron detector aboard the spacecraft.

In addition to Mini-SAR the Chandryaan-1 spacecraft, which was launched in October 2008 from India’s Satish Dhawan Space Centre, also carries NASA’s Moon Mineralogy Mapper for assessing the moon’s mineral resources.