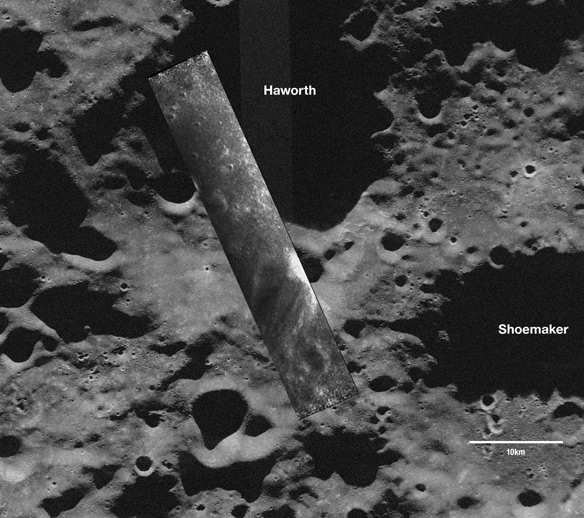 This image is a Mini-RF synthetic aperture radar (SAR) strip overlain on an Earth-based, Arecibo Observatory radar telescope image. Taken Nov. 17, 2008, the south-polar SAR strip shows a part of the moon never seen before: a portion of Haworth crater that is permanently shadowed from Earth and the sun. The only way to explore these regions is by using an orbital radar such as Mini-RF. Over the coming year of Chandrayaan-1 operations, Mini-RF (also known as Mini-SAR) will map both polar regions to look for water ice. The spacecraft acquired these data from a 100-kilometer (62-mile) polar orbit; they reveal features as small as approximately 150 meters (490 feet) across. Bright areas represent surface roughness or slopes pointing toward the spacecraft. The data cover an area approximately 50 kilometers (31 miles) by 18 kilometers (11 miles).