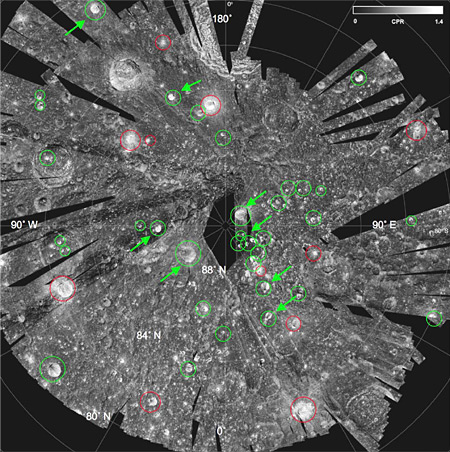 View a Larger version of the CPR Map of the North Pole of the Moon (1.4MB).
Mini-SAR map of the Circular Polarization Ratio (CPR) of the north pole of the Moon. Fresh, “normal” craters (red circles) show high values of CPR inside and outside their rims. This is consistent with the distribution of rocks and ejected blocks around fresh impact features, indicating that the high CPR here is surface scattering. The “anomalous” craters (green circles) have high CPR within, but not outside their rims. Their interiors are also in permanent sun shadow. These relations are consistent with the high CPR in this case being caused by water ice, which is only stable in the polar dark cold traps. We estimate over 600 million cubic meters (1 cubic meter = 1 metric ton) of water in these features.

Using data from a NASA radar that flew aboard India's Chandrayaan-1 spacecraft, scientists have detected ice deposits near the moon's north pole. NASA's Mini-SAR instrument, a lightweight, synthetic aperture radar, found more than 40 small craters with water ice. The craters range in size from 1 to 9 miles (2 to15 km) in diameter. Although the total amount of ice depends on its thickness in each crater, it's estimated there could be at least 1.3 trillion pounds (600 million metric tons) of water ice.

The Mini-SAR has imaged many of the permanently shadowed regions that exist at both poles of the Moons. These dark areas are extremely cold and it has been hypothesized that volatile material, including water ice, could be present in quantity here.  The main science object of the Mini-SAR experiment is to map and characterize any deposits that exist.

Mini-SAR is a lightweight (less than 10 kg) imaging radar.  It uses the polarization properties of reflected radio waves to characterize surface properties.  Mini-SAR sends pulses of radar that are left-circular polarized.  Typical planetary surfaces reverse the polarization during the reflection of radio waves, so that normal echoes from Mini-SAR are right circular polarized.  The ratio of received power in the same sense transmitted (left circular) to the opposite sense (right circular) is called the circular polarization ratio (CPR).  Most of the Moon has low CPR, meaning that the reversal of polarization is the norm, but some targets have high CPR.  These include very rough, fresh surfaces (such as a young, fresh crater) and ice, which is transparent to radio energy and multiply scatters the pulses, leading to an enhancement in same sense reflections and hence, high CPR.  CPR is not uniquely diagnostic of either roughness or ice; the science team must take into account the environment of the occurrences of high CPR signal to interpret its cause.

View a Larger version of the fresh crater CPR (537KB).
The fresh impact crater Main L (14 km diameter), which shows high CPR inside and outside its rim. SC is the “same sense, circular” polarization; CPR is “circular polarization ratio.” The histograms at right show that the high CPR values within (red line) and outside the crater rim (green line) are nearly identical.

Numerous craters near the poles of the Moon have interiors that are in permanent sun shadow.  These areas are very cold and water ice is stable there essentially indefinitely.  Fresh craters show high degrees of surface roughness (high CPR) both inside and outside the crater rim, caused by sharp rocks and block fields that are distributed over the entire crater area.  However, Mini-SAR has found craters near the north pole that have high CPR inside, but not outside their rims.  This relation suggests that the high CPR is not caused by roughness, but by some material that is restricted within the interiors of these craters.  We interpret this relation as consistent with water ice present in these craters.  The ice must be relatively pure and at least a couple of meters thick to give this signature. 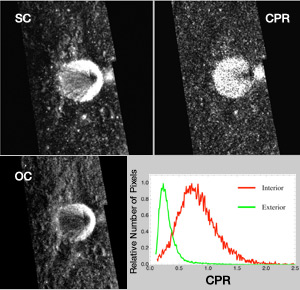 View a Larger version of the Anomalous Polar Crater (627KB).
An “anomalous” crater on the floor of Rozhdestvensky, near the north pole of the Moon. This feature shows high CPR within the crater rim, but low CPR outside, suggesting that roughness (which occurs throughout a fresh crater) is not the cause of the elevated CPR. This feature’s interior is in permanent sun shadow. SC stands for “same sense, circular”, OC stands for “opposite sense, circular” and CPR is the “circular polarization ratio.” The histogram of CPR values clearly shows that interior points (red line) have higher CPR values than those outside the crater rim (green line).

The estimated amount of water ice potentially present is comparable to the quantity estimated solely from the previous mission of Lunar Prospector’s neutron data (several hundred million metric tons.)  The variation in the estimates between Mini-SAR and the Lunar Prospector’s  neutron spectrometer is due to the fact that it only measures to depths of about one-half meter, so it would underestimate the total quantity of water ice present.  At least some of the polar ice is mixed with lunar soil and thus, invisible to our radar.

"The emerging picture from the multiple measurements and resulting data of the instruments on lunar missions indicates that water creation, migration, deposition and retention are occurring on the moon," said Paul Spudis, principal investigator of the Mini-SAR experiment at the Lunar and Planetary Institute in Houston. "The new discoveries show the moon is an even more interesting and attractive scientific, exploration and operational destination than people had previously thought."

"After analyzing the data, our science team determined a strong indication of water ice, a finding which will give future missions a new target to further explore and exploit," said Jason Crusan, program executive for the Mini-RF Program for NASA's Space Operations Mission Directorate in Washington.

The Mini-SAR's findings are being published in the journal Geophysical Research Letters. The results are consistent with recent findings of other NASA instruments and add to the growing scientific understanding of the multiple forms of water found on the moon. The agency's Moon Mineralogy Mapper discovered water molecules in the moon's polar regions, while water vapor was detected by NASA's Lunar Crater Observation and Sensing Satellite, or LCROSS.

Mini-SAR and Moon Mineralogy Mapper are two of 11 instruments on the Indian Space Research Organization's Chandrayaan-1. The Applied Physics Laboratory in Laurel, Md., performed the final integration and testing on Mini-SAR. It was developed and built by the Naval Air Warfare Center in China Lake, Calif., and several other commercial and government contributors.

For more information about Chandrayaan-1, visit: