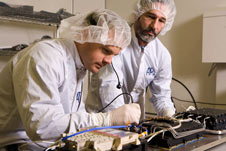 Mini-RF stands for Miniature Radio Frequency. Based on the latest technology, this powerful scientific instrument is much lighter and smaller than previously flown planetary radars. Each Mini-RF instrument consists of electronic boxes and an antenna. The combined mass of these items for Mini-SAR on Chandrayaan-1 was less than 9 kilograms while the Mini-RF instrument on the Lunar Reconnaissance Orbiter weighed approximately 14 kilograms.

Mini-SAR collected strips of data over the lunar poles. Each strip was 8 kilometers wide and either 300 or 150 kilometers long. The team created polar mosaics (covering from 80° latitude to each pole) by combining hundreds of these individual strips. Mini-RF, on LRO, initially targeted observations of exciting areas near the poles discovered by the Chandrayaan-1 instrument, using its advanced capabilities to investigate putative ice deposits.

Early LRO findings that permanently shadowed lunar regions might harbor water and hydrogen included analysis of data from Mini-RF, produced by the instrument’s ability to peer into the dark polar craters that cannot be seen from Earth.

As the mission progressed, the Mini-RF team developed a process that allowed the instrument to collect much more data than originally planned. Mini-RF operators at the Johns Hopkins University Applied Physics Laboratory crafted ways to take advantage of spare downlink capacity in the LRO mission schedule without tapping additional spacecraft resources. The radar could scan non-polar areas as well as the moon’s night side, for example, where devices that needed visible light typically don’t operate. 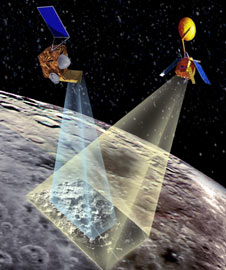 Original mission plans called for Mini-RF to gather two 6- by 240-mile “strips” of data per month; the instrument has since collected more than a thousand strips of data covering about two-thirds of the lunar surface, including 95 percent of both polar regions. Instead of the planned 2 hours of science collection, Mini-RF has actually gathered more than 400 hours of science data.

By spring 2011, the LRO mission had processed and released more data to the scientific community than all previous planetary missions combined. This included more than 38 terabytes of Mini-RF data — more than three times the printed collection of the Library of Congress. These data were sent to NASA’s Planetary Data System archive, where they are made available to all lunar researchers.

Mini-RF has proven that a small, lightweight synthetic aperture radar instrument can be part of a larger payload, instead of requiring a dedicated spacecraft (as needed on past radar missions, such as Magellan. Meeting another mission goal, the Mini-RF antenna was demonstrated as a spacecraft uplink and downlink communications system, able to transmit and receive modulated signals from Earth—
a technology that could allow future missions to save mass and power.