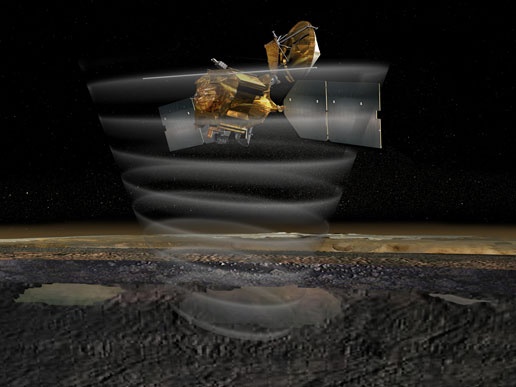 The Shallow Subsurface Radar (SHARAD) will seek liquid or frozen water in the first few hundreds of feet (up to 1 kilometer) of Mars' crust.

SHARAD will probe the subsurface using radar waves using a 15-25 MHz frequency band in order to get the desired high depth resolution.

The radar wave return, which is captured by the SHARAD antenna, is sensitive to changes in the electrical reflection characteristics of the rock, sand, and any water present in the surface and subsurface. Water, like high-density rock, is very conducting, and will have a very strong radar return. Changes in the reflection characteristics of the subsurface, such as layers deposited by geological processes in the ancient history of Mars, will also be visible

The instrument has a horizontal resolution of between 0.3 and 3 kilometers (between 2/10 of a mile and almost 2 miles) horizontally and 15 meters (about 50 feet) vertically. Subsurface features will have to be of the order of these dimensions for them to be observable.

SHARAD is being provided by the Italian Space Agency (ASI). The Principal Investigator (lead scientist) is Roberto Seu.

US investigators selected to participate are: