HiRISE operates in visible wavelengths, the same as human eyes, but with a telescopic lens that will produce images at resolutions never before seen in planetary exploration missions. These high resolution images will enable scientists to resolve 1-meter (about 3-foot) sized objects on Mars and to study the morphology (surface structure) in a much more comprehensive manner than ever before. 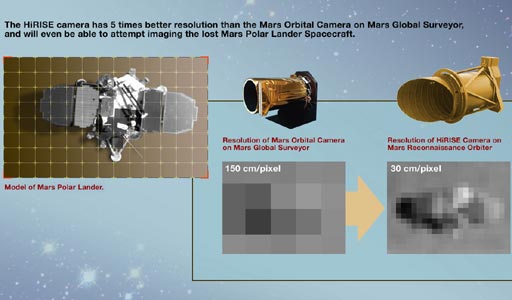 Image above: A comparision between the resolution of a camera aboard Mars Gloabal Surveyor and the HiRISE camera on Mars Reconnaissance Orbiter. Image credit: NASA/JPL.
+ Full image and caption

HiRISE also makes observations at near-infrared wavelengths to obtain information on the mineral groups present. From an altitude varying between 200-400 kilometers (about 125 to 250 miles) above Mars, HiRISE will return surface images that contain individual basketball-sized pixel elements (30-60 centimeters, or 1 to 2 feet wide), allowing surface features 4-8 ft across to be determined (resolved). These new, high-resolution images will provide unprecedented views of layered materials, gullies, channels, and other science targets, as well as characterize possible future landing sites.

Areas for close-up HiRISE imaging will be selected on the basis of data returned from the Mars Global Surveyor and Mars Odyssey missions, and from regional surveys conducted by the orbiter's instruments.

The Principal Investigator (lead scientist) for HiRISE is Alfred McEwen from the Lunar and Planetary Laboratory at the University of Arizona.

Visit the instrument site:
http://marsoweb.nas.nasa.gov/HiRISE/
› Back To Top