NASA's Newest Mars Orbiter Passes Communications Relay Test
An orbiting NASA spacecraft just starting to study Mars with six science instruments has successfully tested another key part of its payload, a versatile radio for relaying communications with robots on the surface of Mars.

During its first relay test since reaching Mars in March, the Mars Reconnaissance Orbiter used this radio payload, called Electra, in a two-way link with NASA's Mars Exploration Rover Spirit. The orbiter has dual roles as a science mission and a telecommunications satellite. It will support communications between Earth and future Mars surface missions, such as the 2007 Phoenix Mars Lander and 2009 Mars Science Laboratory. 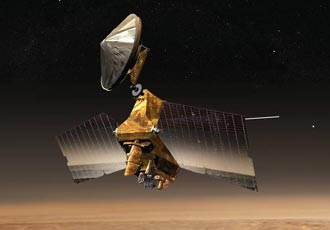 "The successful test establishes Mars Reconnaissance Orbiter as a key element of our Mars telecommunications infrastructure," said Chad Edwards, chief telecommunications engineer of the Mars Network Office at NASA's Jet Propulsion Laboratory, Pasadena, Calif. "With its Electra relay payload, this orbiter will play a critical role in providing robust, high-bandwidth communications links for our future landers later this decade and into the next. It will increase the science return from these missions and enhance our virtual presence on the Martian surface."

JPL's Jim Graf, project manager for Mars Reconnaissance Orbiter, said, "Our primary science phase started Nov. 7, and this successful Electra test shows we're also in good shape for the following phase, the relay phase of the mission. Both phases will make good use of our orbiter's capability for sending data to Earth at up to 10 times the rate of any previous Mars mission."

Using Mars orbiters as radio relays to increase data return from rovers and other landers reduces the mass and power the surface spacecraft need for communications. To build the relay network cost-effectively, NASA includes a relay communications payload on each of its science orbiters.

Mars Global Surveyor, at Mars since 1997, and Mars Odyssey, there since 2001, established a relay capacity that the twin rovers Spirit and Opportunity have used extensively since their 2004 landings. More than 96 percent of the data returned from the rovers has come to Earth via energy-efficient relay through those two orbiters, at much higher data rates than the rovers can achieve on their direct links to Earth.

The Electra package on Mars Reconnaissance Orbiter, like the relay radios on Global Surveyor and Odyssey, uses an ultra-high-frequency (UHF) portion of the radio spectrum. In addition to its relay function, Electra can also be used by surface missions, or by future spacecraft approaching Mars, to determine their positions with precision and to synchronize their clocks.

During last week's tests, Electra initiated a relay session by hailing the Spirit rover. Spirit responded with its own relay radio, and the two spacecraft established a link at 8 kilobits per second on the forward link from Mars Reconnaissance Orbiter to Spirit and 128 kilobits per second from Spirit back to the orbiter. Both radios used a communications standard called the Proximity-1 Space Link Protocol, established by the international Consultative Committee for Space Data Systems for ensuring compatible and gap-free communications on such relay links.

During the four-minute session, the orbiter delivered five commands to the rover, and the rover sent up 30 megabits of information, which the orbiter subsequently transmitted to Earth for delivery to the rover's operations team at JPL.

Nearly all of the signal-processing capabilities of Electra can be reprogrammed in flight, giving it more flexibility than earlier spacecraft relay radios.

"Electra is NASA's first software-defined radio sent to deep space," said JPL's Tom Jedrey, manager for the Electra payload. "From the ground, we can change the fundamentals of its signal processing whenever that is helpful. This means it will be able to accommodate new communication protocols and signal-processing methods over the course of the Mars Reconnaissance Orbiter's operational life."

Additional information about Mars Reconnaissance Orbiter is available online at http://www.nasa.gov/mro . The mission is managed by JPL, a division of the California Institute of Technology in Pasadena, for the NASA Science Mission Directorate, Washington. Lockheed Martin Space Systems, Denver, is the prime contractor for the project and built the spacecraft.