Mars Reconnaissance Orbiter Successfully Concludes Aerobraking
Nearly six months after it entered orbit, Mars Reconnaissance Orbiter has concluded its aerobraking phase. The spacecraft had been dipping in and out of the Red Planet’s atmosphere to adjust its orbit. On August 30, 2006, during its 445th orbit, the spacecraft fired its intermediate thrusters to raise the low point of its orbit and stop dipping into the atmosphere. The six-minute engine burn began at 10:36 a.m. PST, altering the spacecraft’s course so that its periapsis (the closest it comes to the planet) is about 210 kilometers (130 miles) above the planet, well above the atmosphere. 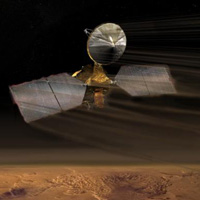 "Aerobraking has changed the course of the spacecraft from just over 35 hours per orbit to just under two hours per orbit, and it has saved us roughly 600 kilograms (1,322 pounds) of fuel," said Dan Johnston, Mars Reconnaissance Orbiter deputy mission manager. "Getting out of aerobraking was a phenomenal moment, and everyone on the flight teams has done a fantastic job to get us where we need to be for science acquisition."

The next step for the spacecraft will be two additional orbit adjustments to put the orbiter in the ideal path to begin gathering the most detailed scientific data yet from the Red Planet. The mission's main science observations are scheduled to begin in November, after a period of transitional deployments and tests, then three weeks of intermittent communications while Mars passes nearly behind the sun.