An unprecedented amount of data - the equivalent of 13 CDs - was returned by the Mars Reconnaissance Orbiter mission in a single day! NASA's latest mission to Mars sent 75 gigabits of data back to Earth from millions of miles away, including beautiful pictures of the Moon. 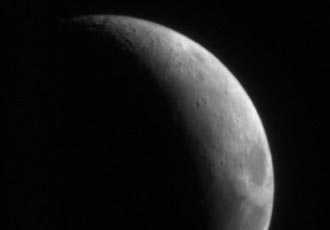 A preview of what's to come with this mighty mission, the spacecraft calibrated its high-resolution camera, using the Moon as its subject. Calibrations of space cameras are, essentially, adjustments to ensure optimal picture taking. On Sept. 8, 2005, the Moon - half bathed in the sun's glow and half draped in darkness - showed off all of its pocks and dimples for the powerful HiRISE camera. The successful calibration bodes well for the capture of stunning and enlightening images at the red planet.

The camera took the shot while at a distance of about 10 million kilometers (6 million miles) from the Moon. The dark feature on the right is Mare Crisium. From that distance, the Moon would appear as a star-like point of light to the unaided eye. The test verified the camera's focusing capability and provided an opportunity for calibration. The spacecraft's Context Camera and Optical Navigation Camera also performed as expected during the test.

The Mars Reconnaissance Orbiter, launched on Aug. 12, 2005, is on course to reach Mars on March 10, 2006. After gradually adjusting the shape of its orbit for half a year, it will begin its primary science phase in November 2006. From the mission's planned science orbit about 300 kilometers (186 miles) above the surface of Mars, the high resolution camera will be able to discern features as small as one meter or yard across.