A dune in the northern polar region of Mars shows significant changes between two images taken on June 25, 2008 and May 21, 2010 by NASA's Mars Reconnaissance Orbiter. Image credit: NASA/JPL-Caltech/Univ. of Ariz./JHUAPL › Full image and caption 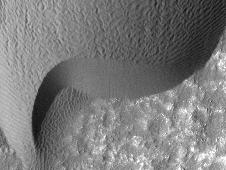 A rippled dune front in Herschel Crater on Mars moved an average of about two meters (about two yards) between March 3, 2007 and December 1, 2010. Image credit: NASA/JPL-Caltech/Univ. of Ariz./JHUAPL
› Full image and caption 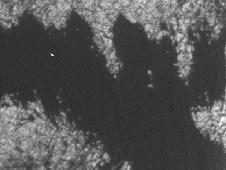 A rippled patch of sand in Becquerel Crater on Mars moved about two meters (about two yards) between November 24, 2006 and September 5, 2010. Image credit: NASA/JPL-Caltech/Univ. of Ariz./JHUAPL
› Full image and caption 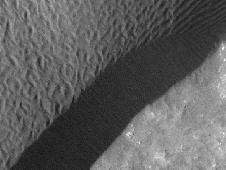 A rippled dune front in Herschel Crater on Mars moved an average of about one meter (about one yard) between March 3, 2007 and December 1, 2010. Image credit: NASA/JPL-Caltech/Univ. of Ariz./JHUAPL
› Full image and caption 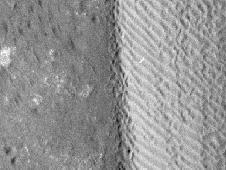 The eastern margin of a rippled dune in Herschel Crater on Mars moved an average distance of three meters (about three yards) between March 3, 2007 and December 1, 2010. Image credit: NASA/JPL-Caltech/Univ. of Ariz./JHUAPL
› Full image and caption

PASADENA, Calif. -- Images from NASA's Mars Reconnaissance Orbiter show sand dunes and ripples moving across the surface of Mars at dozens of locations and shifting up to several yards. These observations reveal the planet's sandy surface is more dynamic than previously thought.

"Mars either has more gusts of wind than we knew about before, or the winds are capable of transporting more sand," said Nathan Bridges, planetary scientist at the Johns Hopkins University's Applied Physics Laboratory in Laurel, Md., and lead author of a paper on the finding published online in the journal Geology. "We used to think of the sand on Mars as relatively immobile, so these new observations are changing our whole perspective."

While red dust is known to swirl all around Mars in storms and dust devils, the planet's dark sand grains are larger and harder to move. Less than a decade ago, scientists thought the dunes and ripples on Mars either did not budge or moved too slowly for detection.

MRO was launched in 2005. Initial images from the spacecraft's High Resolution Imaging Science Experiment (HiRISE) camera documented only a few cases of shifting sand dunes and ripples, collectively called bedforms. Now, after years of monitoring the Martian surface, the spacecraft has documented movements of a few yards (or meters) per year in dozens of locations across the planet.

The air on Mars is thin, so stronger gusts of wind are needed to push a grain of sand. Wind-tunnel experiments have shown that a patch of sand would take winds of about 80 mph (nearly 130 kilometers per hour) to move on Mars compared with only 10 mph (about 16 kilometers per hour) on Earth. Measurements from the meteorology experiments on NASA's Viking landers in the 1970s and early 1980s, in addition to climate models, showed such winds should be rare on Mars.

The first hints that Martian dunes move came from NASA's Mars Global Surveyor, which operated from 1997 to 2006. But the spacecraft's cameras lacked the resolution to definitively detect the changes. NASA's Mars Exploration Rovers also detected hints of shifting sand when they touched down on the Red Planet's surface in 2004. The mission team was surprised to see grains of sand dotting the rovers' solar panels. They also witnessed the rovers' track marks filling in with sand.

"Sand moves by hopping from place to place," said Matthew Golombek, a co-author of the new paper and a member of the Mars Exploration Rover and Mars Reconnaissance Orbiter teams at NASA's Jet Propulsion Laboratory in Pasadena, Calif. "Before the rovers landed on Mars, we had no clear evidence of sand moving."

Not all of the sand on Mars is blowing in the wind. The study also identifies several areas where the bedforms did not move.

"The sand dunes where we didn't see movement today could have larger grains, or perhaps their surface layers are cemented together," said Bridges, who also is a member of the HiRISE team. "These studies show the benefit of long-term monitoring at high resolution."

According to scientists, the seemingly stationary areas might move on much larger time scales, triggered by climate cycles on Mars that last tens of thousands of years. The tilt of Mars' axis relative to its orbital plane can vary dramatically. This, combined with the oval shape of Mars' orbit, can cause extreme changes in the Martian climate, much greater than those experienced on Earth. Mars may once have been warm enough that the carbon dioxide now frozen in the polar ice caps could have been free to form a thicker atmosphere, leading to stronger winds capable of transporting sand.

HiRISE is operated by the University of Arizona in Tucson. The instrument was built by Ball Aerospace & Technologies Corp. of Boulder, Colo. The Mars Exploration Rovers Opportunity and Spirit were built by JPL. JPL also manages the Mars Reconnaissance Orbiter and Mars Exploration Rover projects for NASA's Science Mission Directorate in Washington. Lockheed Martin Space Systems of Denver is NASA's industry partner for the Mars Reconnaissance Orbiter Project and built the spacecraft.

MRO images and additional information is available online at: http://www.nasa.gov/mro and http://mars.jpl.nasa.gov/mro/

For more information about NASA Mars missions, visit the Web at: www.nasa.gov/mars .