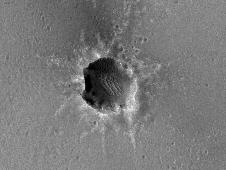 Opportunity arrived at the western edge of Santa Maria crater in mid-December and will spend about two months investigating rocks there. That investigation will take Opportunity into the beginning of its eighth year on Mars. Opportunity landed in the Meridiani Planum region of Mars on Jan. 25, 2004, Universal Time (Jan. 24, Pacific Time) for a mission originally planned to last for three months.

Opportunity and its twin, Spirit, which passed its seventh anniversary on Mars this week, both have made important discoveries about wet environments on ancient Mars that may have been favorable for supporting microbial life.