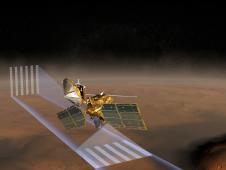 PASADENA, Calif. -- What will the Martian atmosphere be like when the next Mars rover descends through it for landing in August of 2012?

An instrument studying the Martian atmosphere from orbit has begun a four-week campaign to characterize daily atmosphere changes, one Mars year before the arrival of the Mars Science Laboratory rover, Curiosity. A Mars year equals 687 Earth days.

The planet's thin atmosphere of carbon dioxide is highly repeatable from year to year at the same time of day and seasonal date during northern spring and summer on Mars.

The Mars Climate Sounder instrument on NASA's Mars Reconnaissance Orbiter maps the distribution of temperature, dust, and water ice in the atmosphere. Temperature variations with height indicate how fast air density changes and thus the rates at which the incoming spacecraft slows down and heats up during its descent.

"It is currently one Mars year before the Mars Science Laboratory arrival season," said atmospheric scientist David Kass of NASA's Jet Propulsion Laboratory, Pasadena, Calif. "This campaign will provide a set of observations to support the Mars Science Laboratory engineering team and Mars atmospheric modelers. The information will constrain the expected climate at their landing season. It will also help define the range of possible weather conditions on landing day."

During the four years the Mars Climate Sounder has been studying the Martian atmosphere, its observations have seen conditions only at about three in the afternoon and three in the morning. For the new campaign, the instrument team is inaugurating a new observation mode, looking to both sides as well as forward. This provides views of the atmosphere earlier and later in the day by more than an hour, covering the range of possible times of day that the rover will pass through the atmosphere before landing.