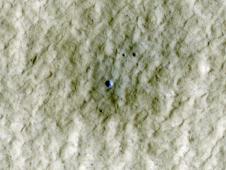 At the center of this view of an area of mid-latitude northern Mars, a fresh crater about 6 meters (20 feet) in diameter holds an exposure of bright material, blue in this false-color image. Image Credit: NASA/JPL-Caltech/University of Arizona
› Full image and caption

Features as small as desks are revealed in the 314 observations made between June 6 and July 7, 2010, now available on the camera team's site and NASA's Planetary Data System.

The camera is one of six instruments on NASA's Mars Reconnaissance Orbiter, which reached Mars in 2006. For more information about the mission, see http://mars.jpl.nasa.gov/mro/ .