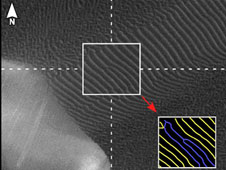 PASADENA, Calif. -- New studies of ripples and dunes shaped by the winds on Mars testify to variability on that planet, identifying at least one place where ripples are actively migrating and another where the ripples have been stationary for 100,000 years or more.

Patterns of dunes and the smaller ripples present some of the more visually striking landforms photographed by cameras orbiting Mars. Investigations of whether they are moving go back more than a decade.

Two reports presented at the 41st Lunar and Planetary Sciences Conference near Houston this week make it clear that the answer depends on where you look. Both reports used images from the High Resolution Imaging Science Experiment (HiRISE) camera on NASA's Mars Reconnaissance Orbiter, which allows examination of features as small as about a meter, or yard, across.

One report is by Simone Silvestro of the International Research School of Planetary Sciences at Italy's G. d'Annunzio University, and his collaborators. They investigated migration of ripples and other features on dark dunes within the Nili Patera area of Mars' northern hemisphere. They compared an image taken on Oct. 13, 2007, with another of the same dunes taken on June 30, 2007. Most of the dunes in the study area are hundreds of meters long. Ripples form patterns on the surfaces of the dunes, with crests of roughly parallel ripples spaced a few meters apart.

Careful comparison of the images revealed places where ripples on the surface of the dunes had migrated about 2 meters (7 feet) -- the largest movement ever measured in a ripple or dune on Mars. The researchers also saw changes in the shape of dune edges and in streaks on the downwind faces of dunes.

"The dark dunes in this part of Mars are active in present-day atmospheric conditions," Silvestro said. "It is exciting to have such high-resolution images available for comparisons that show Mars as an active world."

The other report is by Matthew Golombek of NASA's Jet Propulsion Laboratory, Pasadena, Calif., and collaborators. They checked whether ripples have been moving in the southern-hemisphere area of Mars' Meridiani Planum where the Mars Exploration Rover Opportunity has been working since 2004. They used observations by Opportunity as well as by HiRISE, surveying an area of about 23 square kilometers (9 square miles). Examination of ripples at the edges of craters can show whether the ripples were in place before the crater was excavated or moved after the crater formed.

"HiRISE images are so good, you can tell if a crater is younger than the ripple migration," Golombek said. "There's enough of a range of crater ages that we can bracket the age of the most recent migration of the ripples in this area to more than 100,000 years and probably less than 300,000 years ago."

Winds are still blowing sand and dust at Meridiani. Opportunity has seen resulting changes in its own wheel tracks revisited several months after the tracks were first cut.

Golombek has a hypothesis for why the ripples at Meridiani are static, despite winds, while those elsewhere on Mars may be actively moving. Opportunity has seen that the long ripples in the region are covered with erosion-resistant pebbles, nicknamed "blueberries," which the rover first observed weathering out of softer matrix rocks beside the landing site. These spherules -- mostly about 1 to 3 millimeters (0.04 to 0.12 inches) in diameter -- may be too large for the wind to budge.

"The blueberries appear to form a armoring layer that shields the smaller sand grains beneath them from the wind," he said.

HiRISE Principal Investigator Alfred McEwen, of the University of Arizona, Tucson, said, "The more we look at Mars at the level of detail we can now see, the more we appreciate how much the planet differs from one place to another."

The Mars Reconnaissance Orbiter and the Mars Exploration Rover missions are managed by JPL for NASA's Science Mission Directorate in Washington. Lockheed Martin Space Systems in Denver was the prime contractor for the orbiter and supports its operations. The University of Arizona operates the HiRISE camera, which was built by Ball Aerospace & Technologies Corp., Boulder, Colo.