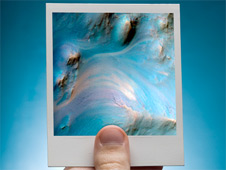 Students, researchers and others can view Mars maps using a new online tool, called "HiWish," to see where images have been taken, check which targets have already been suggested and make new suggestions. Image credit: NASA/JPL-Caltech/University of Arizona
› Larger view

PASADENA, Calif. -- The most powerful camera aboard a NASA spacecraft orbiting Mars will soon be taking photo suggestions from the public.

Since arriving at Mars in 2006, the High Resolution Imaging Science Experiment, or HiRISE, camera on NASA's Mars Reconnaissance Orbiter has recorded nearly 13,000 observations of the Red Planet's terrain. Each image covers dozens of square miles and reveals details as small as a desk. Now, anyone can nominate sites for pictures.

"The HiRISE team is pleased to give the public this opportunity to propose imaging targets and share the excitement of seeing your favorite spot on Mars at people-scale resolution," said Alfred McEwen, principal investigator for the camera and a researcher at the University of Arizona, Tucson.

The idea to take suggestions from the public follows through on the original concept of the HiRISE instrument, when its planners nicknamed it "the people's camera." The team anticipates that more people will become interested in exploring the Red Planet, while their suggestions for imaging targets will increase the camera's already bountiful science return. Despite the thousands of pictures already taken, less than 1 percent of the Martian surface has been imaged.

Students, researchers and others can view Mars maps using a new online tool to see where images have been taken, check which targets have already been suggested and make new suggestions. "The process is fairly simple," said Guy McArthur, systems programmer on the HiRISE team at the University of Arizona. "With the tool, you can place your rectangle on Mars where you'd like."

In addition to identifying the location on a map, anyone nominating a target will be asked to give the observation a title, explain the potential scientific benefit of photographing the site and put the suggestion into one of the camera team's 18 science themes. The themes include categories such as impact processes, seasonal processes and volcanic processes.

The HiRISE science team will evaluate suggestions and put high-priority ones into a queue. Thousands of pending targets from scientists and the public will be imaged when the orbiter's track and other conditions are right.

HiRISE is one of six instruments on the Mars Reconnaissance Orbiter. Launched in August 2005, the orbiter reached Mars the following year to begin a two-year primary science mission. The spacecraft has found that Mars has had diverse wet environments at many locations for differing durations in the planet's history, and Martian climate-change cycles persist into the present era. The Mars Reconnaissance Orbiter is in an extended science phase and will continue to take several thousand images a year. The mission has returned more data about Mars than all other spacecraft combined.

"This opportunity opens up a new path to students and others to participate in ongoing exploration of Mars, said the mission's project scientist, Rich Zurek of NASA's Jet Propulsion Laboratory in Pasadena, Calif.

The University of Arizona Lunar and Planetary Laboratory operates the HiRISE camera, which was built by Ball Aerospace & Technologies Corp. The Mars Reconnaissance Orbiter is managed by JPL for NASA's Science Mission Directorate in Washington. Lockheed Martin Space Systems is the prime contractor for the project and built the spacecraft.

More information about the MRO mission is at http://www.nasa.gov/mro .