The team operating the Context Camera (CTX) aboard NASA's Mars Reconnaissance Orbiter frequently discovers new dark spots on Mars that, upon closer examination, turn out to be brand new impact craters. Sometimes only a single crater is present, but often there is a cluster of several craters. Depending on the patterns and size, crater clusters are interpreted as indicating that the incoming meteorite broke apart before it hit the surface. In some cases, clusters could be formed by ejecta from other, larger impact craters.

Shown here are subframes of two Context Camera images of terrain in western Arcadia Planitia (near 46.7 degrees north latitude, 183.2 degrees west longitude). Each covers an area about 6.5 kilometers (4 miles) across. The first (on the left) was taken on June 4, 2008, the second on Aug. 10, 2008. Between the time the two images were acquired, a cluster of dark spots -- and dark rays radial to some of the dark spots -- formed. The camera team immediately considered this to be a candidate new meteor impact site, but Context Camera images have a resolution of 6 meters (19.7 feet) per pixel. This means that features, including impact craters, smaller than about 20 to 25 meters (65 to 82 feet) across cannot usually be resolved. Thus, most of the dark spots (like these) that the Context Camera team finds and suspects to be new impact craters have to be imaged at higher resolution to find out whether small impact craters are actually present.

To confirm that the features were craters, the Context Camera team created an opportunity for the team operating the High Resolution Imaging Science Experiment (HiRISE) camera, which is also on the Mars Reconnaissance Orbiter, to take a picture of the site. This camera makes images of Mars' surface with a resolution of about 30 centimeters (1 foot) per pixel. Such images can be used to identify objects as small as about a meter (3 feet) across. The Context Camera team targeted its camera to take a new picture centered on the candidate impact site and made a request to the High Resolution Imaging Science Experiment team to take a picture at the same time.

Meanwhile, the Context Camera team also did some homework: Before asking for the High Resolution Imaging Science Experiment to look at candidate new impact sites, such as the dark spots shown here, they make the best determination possible as to when the features formed. If the features result from a meteor impact, then the team can state approximately when the impact occurred. In the case shown here, the impact occurred sometime between June 4 and Aug. 10, 2008. At the time it was found, this candidate impact site was so new that the Context Camera team very quickly suggested that the High Resolution Imaging Science Experiment take a look so that a good example of a very new impact site could be examined.

That interest -- and the Context Camera team's quick work -- paid off. The High Resolution Imaging Science Experiment team obtained a picture of the site on Sept. 12, 2008, just a month after the Aug. 10 Context Camera image was received on Earth and evaluated. The Sept. 12 image, HiRISE PSP_009978_2265, shows a nice cluster of new impact craters. Some of the craters exposed a light-toned material that appeared somewhat bluish in the High Resolution Imaging Science Experiment's color data. Immediately suspecting the material to be an exposure of subsurface ice, the High Resolution Imaging Science Experiment team began a campaign to monitor this site to see if the bright material changed. It did, suggesting that perhaps the material was going away, just as ice might do at that time of year (summer in Mars' northern hemisphere). The two camera teams worked during the next several months to identify more such craters and, in the end, found a total of five brand new impact crater sites at northern middle latitudes that seemed to have exposed buried water ice. At the same time, the camera teams encouraged the team operating the Compact Reconnaissance Imaging Spectrometer for Mars (CRISM), a third instrument on the Mars Reconnaissance Orbiter, to obtain multispectral infrared observations. Most of the craters and bright patches were too small for the spectrometer to resolve, but one of them was large enough that the spectrometer team did, in fact, confirm that the light-toned material was water ice.

Details and scientific interpretation of these new impact craters and their use to examine subsurface ice at northern mid-latitudes on Mars are captured in a paper published this week in Science by Shane Byrne and 17 colleagues on teams operating the Contect Camera, High Resolution Imaging Science Experiment, and Compact Reconnaissance Imaging Spectrometer for Mars. All of that effort began with a single pair of Context Camera images, the two shown here. If the Context Camera team had not found these first two images and had not immediately attempted to re-image the suspected crater cluster and provide an opportunity for High Resolution Imaging Science Experiment to "ride along," then the most important aspect of the observations reported in Science -- the presence of excavated ground ice -- would have been lost because the ice began to disappear or darken immediately after the impacts occurred.


Ice in Pair of Fresh Craters on Mars Fades with Time 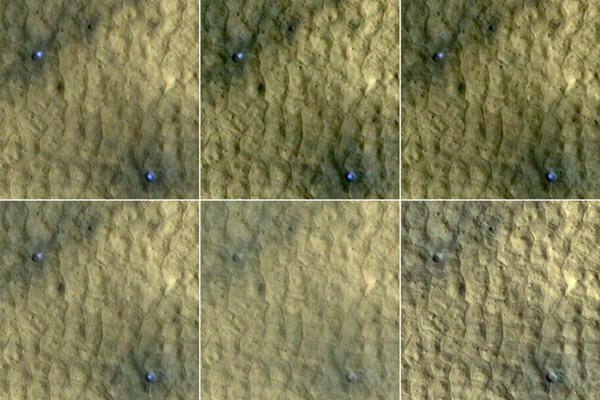 This series of images spanning a period of 15 weeks shows a pair of fresh, middle-latitude craters on Mars in which some bright, bluish material apparent in the earliest images disappears by the later ones. Each panel is 75 meters (246 feet) across. The two craters are each about 4 meters (13 feet) in diameter and half a meter (1.5 feet) deep.

The bright material is water ice that was uncovered by the meteorite impact that excavated these small craters less than 15 weeks before the initial image of this series. Sublimation of the ice during the Martian summer leaves behind a dust layer that gradually thickens to the point where it obscures the ice.

The High Resolution Imaging Science Experiment (HiRISE) camera on NASA's Mars Reconnaissance Orbiter took these images of this site at 46.33 degrees north latitude, 176.90 degrees east longitude. The HiRISE camera's targeting of the site was prompted by two earlier images from the Context Camera on the Mars Reconnaissance Orbiter, which showed that the impact responsible for these craters had not yet occurred by June 4, 2008, but had occurred by Aug. 10, 2008.

Images (not shown here) taken by the Thermal Emission Imaging System camera on NASA's Mars Odyssey orbiter and by the Context Camera on the Mars Reconnaissance Orbiter show that the impact that excavated this crater occurred sometime between Dec. 22, 2008 and July 5, 2008.

The impact exposed water ice from below the surface. It is the bright material visible in this pair of images. The change in appearance from the earlier image to the later one resulted from some of the ice sublimating away during the Martian northern-hemisphere summer, leaving behind dust that had been intermixed with the ice. The thickening layer of dust on top obscured the remaining ice. This crater is at 43.28 degrees north latitude, 164.22 degrees east longitude. 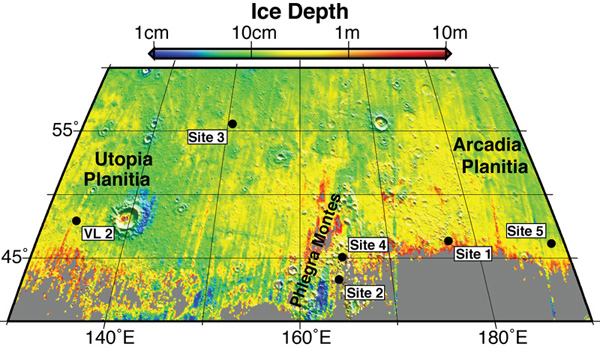 
This map shows five locations where fresh impact cratering has excavated water ice from just beneath the surface of Mars (sites 1 through 5) and the Viking Lander 2 landing site (VL2), in the context of color coding to indicate estimated depth to ice.

This map shows five locations where fresh impact cratering has excavated water ice from just beneath the surface of Mars (sites 1 through 5) and the Viking Lander 2 landing site (VL2), in the context of color coding to indicate estimated depth to ice.

The map covers an area from 40 to 60 degrees north latitude and from 130 to 190 degrees east longitude. Estimates of the depth to water-ice come from a computer model and observations of the brightness and temperature of the surface. The model matches the ice-exposing crater observations by NASA's Mars Reconnaissance Orbiter and data from the neutron spectrometer on NASA's Mars Odyssey orbiter.

Analysis of the observations of ice-exposing fresh craters at sites 1 through 5, reported by Byrne et al. in a Sept. 25, 2009, paper in the journal Science, leads the paper's authors to calculate that if NASA's Viking Lander 2 had been able to dig slightly deeper than the 10-to-15-centimeter-deep (4-to-6-inch-deep) trench that it excavated in 1976, it would have hit water ice.

The color coding indicates depths to the top of a water-ice-containing layer, ranging from 1 centimeter (about half an inch) in dark-blue coded locations to 10 meters (33 feet) in red-coded locations.


Material Excavated by a Fresh Impact and Identified as Water Ice 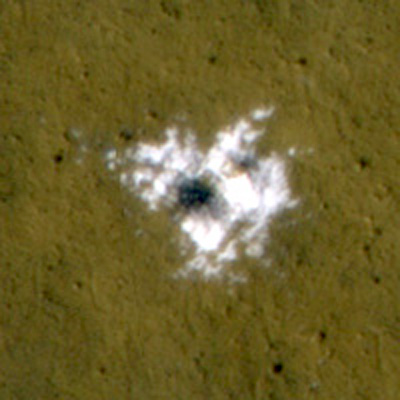 The bright material conspicuous in this image was excavated from below the surface and deposited nearby by a 2008 impact that dug a crater about 8 meters (26 feet) in diameter. The extent of the bright patch was large enough for the Compact Reconnaissance Imaging Spectrometer for Mars, an instrument on NASA's Mars Reconnaissance Orbiter, to obtain information confirming the material to be water ice.

This image, covering an area 50 meters (164 feet) across, was taken on Nov. 1, 2008, by the High Resolution Imaging Science Experiment on the same orbiter. The time frame for the crater-forming impact to have occurred was bracketed by before-and-after images (not shown) taken by the Thermal Emission Imaging System camera aboard NASA's Mars Odyssey orbiter on Jan. 26, 2008, and by the Context Camera on the Mars Reconnaissance Orbiter on Sept. 18, 2008.