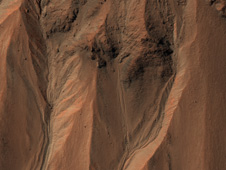 The High Resolution Imaging Science Experiment (HiRISE) camera on the orbiter recorded these images from the month of April through early August of this year. The camera team at the University of Arizona, Tucson, releases several featured images each week and periodically releases much larger sets of new images, such as the batch posted today.

The new images are available at http://hirise.lpl.arizona.edu/releases/sept_09.php .

Each full image from HiRISE covers a strip of Martian ground 6 kilometers (3.7 miles) wide, about two to four times that long, showing details as small as 1 meter, or yard, across.

The Mars Reconnaissance Orbiter has been studying Mars with an advanced set of instruments since 2006. It has returned more data about the planet than all other past and current missions to Mars combined. For more information about the mission, visit: http://www.nasa.gov/mro .

The Mars Reconnaissance Orbiter is managed by the Jet Propulsion Laboratory, Pasadena, Calif., for NASA's Science Mission Directorate, Washington. JPL is a division of the California Institute of Technology, also in Pasadena. Lockheed Martin Space Systems, Denver, is the prime contractor for the project and built the spacecraft. The High Resolution Imaging Science Experiment is operated by the University of Arizona, Tucson, and the instrument was built by Ball Aerospace & Technologies Corp., Boulder, Colo. Guy Webster 818-354-6278
Jet Propulsion Laboratory, Pasadena, Calif.
guy.webster@jpl.nasa.gov