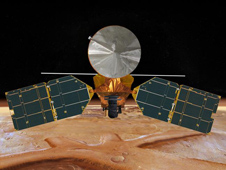 PASADENA, Calif. -- NASA's Mars Reconnaissance Orbiter unexpectedly rebooted its computer Monday morning, Feb. 23, and put itself into a limited-activity mode that is an automated safety response.

The mission's flight-team engineers are examining possible causes of the event while planning to prepare the spacecraft to resume its scientific investigations of Mars. There has been no reoccurrence of the reboot event.

The spacecraft is in communication with and under control by the flight team. Its batteries are charged and its solar panels are properly generating electricity. The team successfully commanded an increase of more than 10,000-fold in the communication rate Monday afternoon from the rate of 40 bits per second that the orbiter initially adopted when it went into the precautionary "safe" mode.

"We are going to bring the spacecraft back to normal operations, but we are going to do so in a cautious way, treating this national treasure carefully," said Jim Erickson of NASA's Jet Propulsion Laboratory, Pasadena, Calif., project manager for the Mars Reconnaissance Orbiter. "The process will take at least a few days."

From the spacecraft data received after communications accelerated, the team gained a preliminary indication that the cause of the reboot might have been a measurement -- possibly erroneous -- of a brief increase in power load. The event lasted between 200 nanoseconds and 41 seconds. Engineers identified one possible scenario as a cosmic-ray hit that could have caused an erroneous voltage reading that would last 9 microseconds, enough to trigger the reboot.

The reboot occurred at about 4:25 a.m. Pacific Standard Time on Monday, while the orbiter was behind Mars from Earth's perspective. This is the fifth time since the spacecraft's August 2005 launch that it has entered safe mode, which is its programmed precaution when it senses a condition for which it does not know a more specific response. The symptoms from this week's event do not match any of the prior safe-mode events.

JPL, a division of the California Institute of Technology, manages the Mars Reconnaissance Orbiter for NASA's Science Mission Directorate, Washington.  Lockheed Martin Space Systems is the prime contractor for the project and built the spacecraft.  For more information about the mission, visit: http://www.nasa.gov/mro .