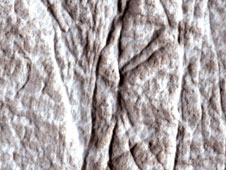 Researchers used images from the spacecraft's High Resolution Imaging Science Experiment, or HiRISE, camera. Images of layered rock deposits at equatorial Martian sites show the clusters of fractures to be a type called deformation bands, caused by stresses below the surface in granular or porous bedrock.

"Groundwater often flows along fractures such as these, and knowing that these are deformation bands helps us understand how the underground plumbing may have worked within these layered deposits," said Chris Okubo of the U.S. Geological Survey in Flagstaff, Ariz.

"These structures are important sites for future exploration and investigations into the geological history of water and water-related processes on Mars," Okubo and co-authors state in a report published online this month in the Geological Society of America Bulletin.

Deformation band clusters in Utah sandstones, as on Mars, are a few meters or yards wide and up to a few kilometers or miles long. They form from either compression or stretching of underground layers, and can be precursors to faults. The ones visible at the surface have become exposed as overlying layers erode away. Deformation bands and faults can strongly influence the movement of groundwater on Earth and appear to have been similarly important on Mars, according to this study.

"This study provides a picture of not just surface water erosion, but true groundwater effects widely distributed over the planet," said Suzanne Smrekar, deputy project scientist for the Mars Reconnaissance Orbiter at NASA's Jet Propulsion Laboratory in Pasadena, Calif. "Groundwater movement has important implications for how the temperature and chemistry of the crust have changed over time, which in turn affects the potential for habitats for past life."

The recent study focuses on layered deposits in Mars' Capen crater, approximately 70 kilometers (43 miles) in diameter and 7 degrees north of the equator. This formerly unnamed crater became notable due to this discovery of deformation bands within it and was recently assigned a formal name. The crater was named for the late Charles Capen, who studied Mars and other objects as an astronomer at JPL's Table Mountain Observatory in Southern California and at Lowell Observatory, Flagstaff, Ariz.

The HiRISE camera is one of six science instruments on the orbiter. It can reveal smaller details on the surface than any previous camera to orbit Mars. The orbiter reached Mars in March 2006 and has returned more data than all other current and past missions to Mars combined.

The mission is managed by JPL for NASA's Science Mission Directorate. JPL is managed for NASA by the California Institute of Technology in Pasadena. Lockheed Martin Space Systems of Denver built the spacecraft. The University of Arizona operates the HiRISE camera, built by Ball Aerospace and Technology Corp. of Boulder, Colo.

Images of the deformation band clusters and additional information about the mission are on the Internet at: http://www.nasa.gov/mro .