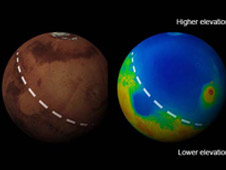 NASA's Mars Reconnaissance Orbiter and Mars Global Surveyor have provided detailed information about the elevations and gravity of the Red Planet's northern and southern hemispheres. A new study using this information may solve one of the biggest remaining mysteries in the solar system: why does Mars have two strikingly different kinds of terrain in its northern and southern hemispheres? The huge crater is creating intense scientific interest.

The mystery of the two-faced nature of Mars has perplexed scientists since the first comprehensive images of the surface were beamed home by NASA spacecraft in the 1970s. The main hypotheses have been an ancient impact or some internal process related to the planet's molten subsurface layers. The impact idea, proposed in 1984, fell into disfavor because the basin's shape didn't seem to fit the expected round shape for a crater. The newer data is convincing some experts who doubted the impact scenario.

"We haven't proved the giant-impact hypothesis, but I think we've shifted the tide," said Jeffrey Andrews-Hanna, a postdoctoral researcher at the Massachusetts Institute of Technology in Cambridge.

Andrews-Hanna and co-authors Maria Zuber of MIT and Bruce Banerdt of NASA's Jet Propulsion Laboratory in Pasadena, Calif., report the new findings in the journal Nature this week. 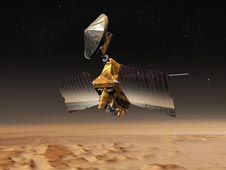 Artist's concept of the Mars Reconnaissance Orbiter. Image credit: NASA/JPL
›  Larger view A giant northern basin that covers about 40 percent of Mars' surface, sometimes called the Borealis basin, is the remains of a colossal impact early in the solar system's formation, the new analysis suggests. At 5,300 miles across, it is about four times wider than the next-biggest impact basin known, the Hellas basin on southern Mars. An accompanying report calculates that the impacting object that produced the Borealis basin must have been about 1,200 miles across. That's larger than Pluto.

"This is an impressive result that has implications not only for the evolution of early Mars, but also for early Earth's formation," said Michael Meyer, the Mars chief scientist at NASA Headquarters in Washington.

This northern-hemisphere basin on Mars is one of the smoothest surfaces found in the solar system. The southern hemisphere is high, rough, heavily cratered terrain, which ranges from 2.5 to 5 miles higher in elevation than the basin floor.

Other giant impact basins have been discovered that are elliptical rather than circular. But it took a complex analysis of the Martian surface from NASA's two Mars orbiters to reveal the clear elliptical shape of Borealis basin, which is consistent with being an impact crater.

One complicating factor in revealing the elliptical shape of the basin was that after the time of the impact, which must have been at least 3.9 billion years ago, giant volcanoes formed along one part of the basin rim and created a huge region of high, rough terrain that obscures the basin's outlines. It took a combination of gravity data, which tend to reveal underlying structure, with data on current surface elevations to reconstruct a map of Mars elevations as they existed before the volcanoes erupted. 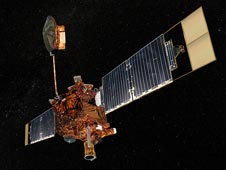 Artist's concept of Mars Global Surveyor. Image credit: NASA/JPL
+ Larger view "In addition to the elliptical boundary of the basin, there are signs of a possible second, outer ring - a typical characteristic of large impact basins," Banerdt said.

David Chandler
Massachusetts Institute of Technology
617-253-2704
dlc1@mit.edu
› Back To Top