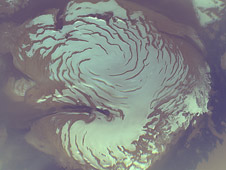 The findings suggest any liquid water that might exist below the planet's surface, and any possible organisms living in that water, would be located deeper than scientists had suspected.

"We found that the rocky surface of Mars is not bending under the load of the north polar ice cap," said Roger Phillips of the Southwest Research Institute in Boulder, Colo. Phillips is the lead author of a new report appearing in this week's online version of Science. "This implies that the planet's interior is more rigid, and thus colder, than we thought before."

The discovery was made using the Shallow Radar instrument on the spacecraft, which has provided the most detailed pictures to date of the interior layers of ice, sand and dust that make up the north polar cap on Mars. The radar images reveal long, continuous layers stretching up to 600 miles (1,000 kilometers), or about one-fifth the length of the United States.

"In our first glimpses inside the polar ice using the radar on Mars Reconnaissance Orbiter, we can clearly see stacks of icy material that trace the history of Mars' climate," said Jeffrey Plaut of NASA's Jet Propulsion Laboratory, Pasadena, Calif. Plaut is a science team member and a co-author of the paper. "Radar has opened up a new avenue for studying Mars' past." 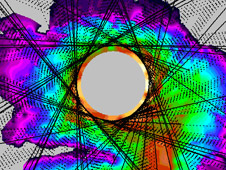 This map shows the thickness of the north polar layered deposits on Mars as measured by the Shallow Radar instrument on NASA's Mars Reconnaissance Orbiter. Image credit: NASA/JPL-Caltech/University of Rome/SwRI
›  Full image and caption The radar pictures show a smooth, flat border between the ice cap and the rocky Martian crust. On Earth, the weight of a similar stack of ice would cause the planet's surface to sag. The fact that the Martian surface is not bending means that its strong outer shell, or lithosphere -- a combination of its crust and upper mantle -- must be very thick and cold.

"The lithosphere of a planet is the rigid part. On Earth, the lithosphere is the part that breaks during an earthquake," said Suzanne Smrekar, deputy project scientist for Mars Reconnaissance Orbiter at JPL. "The ability of the radar to see through the ice cap and determine that there is no bending of the lithosphere gives us a good idea of present day temperatures inside Mars for the first time."

Temperatures in the outer portion of a rocky planet like Mars increase with depth toward the interior. The thicker the lithosphere, the more gradually the temperatures increase. The discovery of a thicker Martian lithosphere therefore implies that any liquid water lurking in aquifers below the surface would have to be deeper than previously calculated, where temperatures are warmer. Scientists speculate that any life on Mars associated with deep aquifers also would have to be buried deeper in the interior.

The radar pictures also reveal four zones of finely spaced layers of ice and dust separated by thick layers of nearly pure ice. Scientists think this pattern of thick, ice-free layers represents cycles of climate change on Mars on a time scale of roughly one million years. Such climate changes are caused by variations in the tilt of the planet's rotational axis and in the eccentricity of its orbit around the sun. The observations support the idea that the north polar ice cap is geologically active and relatively young, at about 4 million years.

On May 25, NASA's Phoenix Mars Lander is scheduled to touch down not far from the north polar ice cap. It will further investigate the history of water on Mars, and is expected to get the first up-close look at ice on the Red Planet. 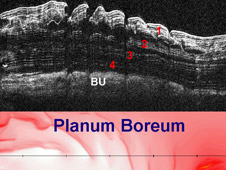 This radar image (top) reveals the layers of ice, sand and dust that make up the north polar ice cap on Mars. The colored map below shows the topography of the corresponding Martian terrain. Image credit: NASA/JPL-Caltech/University of Rome/SwRI
›  Full image and caption The Shallow Radar instrument was provided by the Italian Space Agency, and its operations are led by the InfoCom Department, University of Rome "La Sapienza." Thales Alenia Space Italia, in Rome, is the Italian Space Agency's prime contractor for the radar instrument. Astro Aerospace of Carpinteria, Calif., a business unit of Los Angeles-based Northrop Grumman Corp., developed the instrument's antenna as a subcontractor to Thales Alenia Space Italia.

The Mars Reconnaissance Orbiter mission is managed by JPL for NASA's Science Mission Directorate in Washington. Lockheed Martin Space Systems in Denver was the prime contractor for the orbiter and supports its operations.