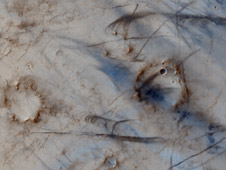 Dust-devils are vortices of wind that form when air rising from a warm surface encounters shear in the above atmosphere.Image credit: NASA/JPL/University of Arizona
› Full image and caption


Mars has an ethereal, tenuous atmosphere with less than one-percent the surface pressure of Earth, which challenges scientists to explain complex, wind-sculpted landforms seen with unprecedented detail in images from NASA's Mars Reconnaissance Orbiter.

One of the main questions has been if winds on present-day Mars are strong enough to form and change geological features, or if wind-constructed formations were made in the past, perhaps when winds speeds and atmospheric pressures were higher.

The eye-opening new views of wind-driven Mars geology come from the University of Arizona's High Resolution Imaging Science Experiment camera (HiRISE). As the orbiter flies at about 3,400 meters per second (7,500 mph) between 250 and 315 kilometers (155 to 196 miles) above the Martian surface, this camera can see features as small as half a meter (20 inches).

"We're seeing what look like smaller sand bedforms on the tops of larger dunes, and, when we zoom in more, a third set of bedforms topping those," said HiRISE co-investigator Nathan Bridges of NASA's Jet Propulsion Laboratory in Pasadena, Calif. "On Earth, small bedforms can form and change on time scales as short as a day."

There are two kinds of "bedforms," or wind-deposited landforms. They can be sand dunes, which are typically larger and have distinct shapes. Or they can be ripples, in which sand is mixed with coarser particles. Ripples are typically smaller and more linear.

HiRISE also shows detail in sediments deposited by winds on the downwind side of rocks. Such "windtails" show which way the most current winds have blown, Bridges said. They have been seen before, but only by rovers and landers, never by an orbiter. Researchers can now use HiRISE images to infer wind directions over the entire planet.

"HiRISE is showing us just how interesting layers in yardangs are," Bridges said. "For example, we see one layer that appears to have rocks in it. You can actually see rocks in the layer, and if you look downslope, you can see rocks that we think have eroded out from that rocky layer above."

New images show that some layers in the yardangs are made of softer materials that have been modified by wind, he added. The soft material could be volcanic ash deposits, or the dried-up remnants of what once were mixtures of ice and dust, or something else. "The fact that we see layers that appear to be rocky and layers that are obviously soft says that the process that formed yardangs is no simple process but a complicated sequence of processes," Bridges said.

"HiRISE keeps showing interesting things about terrains that I expected to be uninteresting," said Alfred McEwen of the University of Arizona Lunar and Planetary Laboratory, HiRISE principal investigator. "I was surprised by the diversity of morphology of the thick dust mantles. Instead of a uniform blanket of smooth dust, there are often intricate patterns due to the action of the wind and perhaps light cementation from atmospheric volatiles."

Paul Geissler of the U.S. Geological Survey, Flagstaff, Ariz., has discovered from HiRISE images that dark streaks coming from Victoria Crater probably consist of streaks of dark sand blown out from the crater onto the surface. Scientists had wondered if wind might have blown away lighter-colored surface material, exposing a darker underlying surface. Geissler is comparing HiRISE images to images taken by NASA's Mars Exploration Rover Opportunity rover at Victoria Crater.

Bridges is lead author and McEwen is a co-author on the paper titled "Windy Mars: A dynamic planet as seen by the HiRISE camera" in Geophysical Research Letters in December.

Information about the Mars Reconnaissance Orbiter spacecraft is online at http://www.nasa.gov/mro . The mission is managed by JPL, a division of the California Institute of Technology, Pasadena, for the NASA Science Mission Directorate, Washington, D.C. Lockheed Martin Space Systems, Denver, is the prime contractor and built the spacecraft. Ball Aerospace & Technologies Corp., Boulder, Colo., built the HiRISE camera operated by The University of Arizona, Tucson.