NASA Orbiter Provides Color Views of Mars Landing Site Candidates
PASADENA, CALIF. -- Less than a year since beginning the prime science phase of its mission, NASA's Mars Reconnaissance Orbiter has passed a mission-success milestone for the amount of data returned.

The data-volume target of 26 terabits, which was surpassed this week, is equivalent to about 5,000 CD-ROMs full and exceeds the total from all other current and past Mars missions combined. 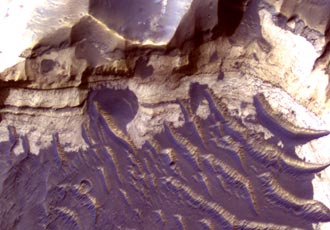 The biggest shares of the data come from two of the orbiter's six science instruments: the High Resolution Imaging Science Experiment and the Compact Reconnaissance Imaging Spectrometer for Mars. The high-resolution camera's team of investigators, based at the University of Arizona, Tucson, today released 143 color images. The images reveal features as small as a desk. They are valuable to researchers studying possible landing sites for NASA's Mars Science Laboratory, a mission launching in 2009 to deploy a long-distance rover carrying sophisticated science instruments on Mars.

The camera team is also releasing a color movie, scrolling over one candidate Mars Science Laboratory landing site in Nili Fossae, at 21 degrees north latitude and 74 degrees east latitude. The animation shows a range of enhanced colors that correspond to what Mars Reconnaissance Orbiter's imaging spectrometer has determined to be hydrated clay minerals and unaltered volcanic rocks. 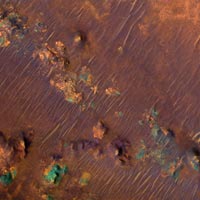 The color images released today were taken at or near about 30 proposed landing sites for the 2009 mission. That mission's deputy project scientist, Ashwin Vasavada of NASA's Jet Propulsion Laboratory, Pasadena, Calif., said, "Scientists planning the Mars Science Laboratory must soon choose the one site on Mars where we can best investigate the extent to which Mars' environment is or was capable of supporting life -- no easy task. We've intentionally waited for the reconnaissance from the Mars Reconnaissance Orbiter to help us zero in on those places."

Beginning this week, images will be released in color as well as black-and-white on the camera team's Web site. The colors are false color, not the way Mars would look to human eyes. The images are processed to maximize color differences, a technique useful for analyzing landscapes.

"Color data are proving very useful in interpreting geologic processes and history on Mars," McEwen said. "The images we're releasing today include views of some of the most interesting and compositionally diverse areas on the planet." 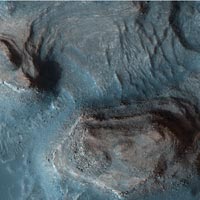 Image right: Rocky mesas of the Nilosyrtis Mensae region. This image shows a region of science interest to which the Mars Science Laboratory rover might drive. Image credit: NASA/JPL/University of Arizona
+ Full image and caption

The camera team developed computer software that automatically processes images from the different color filters into color images. "The technical hurdle has been that the sets of different color detectors are staggered within the camera focal plane array, and the spacecraft isn't perfectly steady as it operates in space," the camera's operations manager, Eric Eliason of UA, said.

Color is a boon to geologists who have been trying to discriminate different surface materials and their relation to the topography, McEwen said. "Color clearly identifies basic material distinctions like dust, sand or rocks, light-toned layered material, and frost or ice," he said. Color also helps geologists correlate layers in the Martian terrain. And scientists will be able to combine data from the high-resolution camera and the imaging spectrometer to make detailed maps of minerals and soil types on the planet.

Information about the Mars Reconnaissance Orbiter and examples from the new images are online at http://www.nasa.gov/mro . All of the new images are online at the camera team's Web site, http://hirise.lpl.arizona.edu , and are available through the Planetary Data System, NASA's space mission data archive. Additional information about the Mars Science Laboratory mission is at http://mars.jpl.nasa.gov/msl.

The Mars Reconnaissance Orbiter and the Mars Science Laboratory missions are managed by JPL, a division of the California Institute of Technology in Pasadena, for the NASA Science Mission Directorate, Washington. Lockheed Martin Space Systems, Denver, is the prime contractor and built the spacecraft. The High Resolution Imaging Science Experiment is operated by the University of Arizona. Ball Aerospace and Technologies Corp., Boulder, Colo., built the instrument. .