The High Resolution Imaging Science Experiment (HiRISE) camera on the orbiter has now taken more than 3,000 images of Mars, resolving features as small as a desk in targeted areas covering thousands of square miles of the Martian surface. Already, this is the largest Mars data set ever acquired by a single experiment. The camera is one of six instruments on the orbiter. 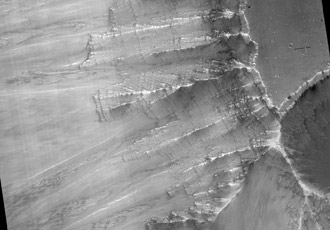 During the first three months after the orbiter's primary science phase began in November, researchers saw an increase in noise and pixel dropouts in data from seven of the camera's 14 detectors. The effects on image quality were small in all but two detectors, but the trend raised concerns noted in a Feb. 7 news release .

Tests have yielded an explanation for the earlier pattern, and the camera's performance record shows the noise stopped getting worse after about three to four months of the science phase.

Alfred McEwen of the University of Arizona, Tucson, principal investigator for the camera, said, "I'm happy to report that there has been no detectable degradation over the past five months."

A team at Ball Aerospace & Technologies Corp., Boulder, Colo., designer and builder of the instrument, has used an engineering model of the camera's focal-plane system to successfully duplicate the problem. This has helped in understanding causes and in testing a procedure for warming the focal-plane electronics prior to each image. One cause is that an electrical interface lacked extra capability beyond minimum requirements. Another cause is an unexpected change in performance of another electronic component over the course of the first thousand or so large images. With pre-warming, the camera acquires good data from all detectors, though minor noise remains an issue in data from one of two channels of one detector collecting infrared imagery.

McEwen said, "Given the stability we've seen and understanding the nature of the problem, we now expect HiRISE to return high-quality data for years to come."

Images from the High Resolution Imaging Science Experiment are online at http://hirise.lpl.arizona.edu .

Additional information about the Mars Reconnaissance Orbiter is online at http://www.nasa.gov/mro .