NASA Orbiter Reveals New Details of Mars, Young and Old
During its first week of observations from low orbit, NASA's newest Mars spacecraft is already revealing new clues about both recent and ancient environments on the red planet. 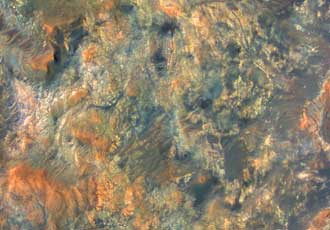 Image right: This view shows diverse materials and morphologies in the region south of Mawrth Vallis on Mars. The color is composed of infrared, red, and blue-green color images, and has been enhanced to accentuate the color differences. Image credit: NASA/JPL/Univ. of Arizona
+ Full image and caption

Between Sept. 29 and Oct. 6, science instruments on the spacecraft viewed dozens of sites that reflect different episodes in Mars' history. The diverse sites provide a good test for the capabilities of the spacecraft instruments. The orbiter will begin its primary science mission phase in early November when Mars re-emerges from passing nearly behind the sun.

The instruments are seeing details in the shapes and icy composition of geologically young layering near the Martian north pole. Other views offer details of a mid-latitude valley whose upper layers have been eroded away, revealing an underlying clay layer that formed a few billion years ago, when wet conditions produced the clay. Observations of a southern-hemisphere crater show fine-scale details of more recent gullies, adding evidence that they were carved by flowing water.

"In this opening phase we have tested the instruments, and they are working perfectly," said Dr. Steve Saunders, Mars Reconnaissance Orbiter program scientist at NASA Headquarters, Washington. "The teams are getting amazing science data. They are ready to fulfill the mission's science objectives and to support other Mars missions. One image is already helping the Mars Exploration Rover team choose a route to explore Victoria Crater. Others will help guide the selection of a safe site for the future Phoenix Mars Lander."

In Chasma Boreale, a vast valley that juts into the north polar ice cap, the orbiter's spectrometer sees layers that vary in soil composition and in how much ice is mixed with the soil. A dark underlying layer contains little ice, but just beneath it lies ice-rich material resembling higher layers. The spectrometer takes pictures both in visible-light and infrared wavelengths useful for identifying what a target is made of. 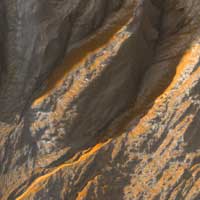 Image left: This enhanced-color view shows gullies in an unnamed crater in the Terra Sirenum region of Mars. It is a sub-image from a larger view imaged by the High Resolution Imaging Science Experiment (HiRISE) camera on NASA's Mars Reconnaissance Orbiter on Oct. 3, 2006. Image credit: NASA/JPL/Univ. of Arizona
+ Full image and caption

"You see more-ice-rich and less-ice-rich layers, which tells you that conditions changed from the time one layer was deposited to the time another layer was deposited," said Dr. Scott Murchie of Johns Hopkins University Applied Physics Laboratory, Laurel, Md. Murchie is the principal investigator for the spectrometer on the spacecraft. "These layers are geologically young -- on the order of thousands or millions of years -- and may hold clues about climate cycles."

A lower-latitude target was Mawrth Vallis. The European Mars Express spacecraft previously discovered ancient deposits of clay minerals that could form only if water were present for a long time at Mawrth Vallis. The Mars Reconnaissance Orbiter's spectrometer has resolved smaller-scale compositional features and detected differing clay mineral content. The clay-rich areas show some of the best evidence for conditions possibly favorable for life on ancient Mars, Murchie said.

The mission's High Resolution Imaging Science Experiment camera has shown unprecedented detail in orbital images of Mars. An example was released recently showing the Opportunity rover at Victoria Crater. The camera imaged 64 areas on Mars during the testing week. "These images are truly beautiful, and since they resolve features the size of people, you can visualize yourself hiking around in these diverse terrains," said the camera's principal investigator, Dr. Alfred McEwen of the University of Arizona, Tucson.

The high-resolution camera, the imaging spectrometer and the orbiter's wider-looking Context Camera all observed Mawrth Vallis. Details visible in the new observations, such as small channels, are consistent with past wet conditions, McEwen said.

Another observation of an unnamed southern crater shows relatively young gullies, like those seen in many Mars locations viewed by NASA's Mars Global Surveyor orbiter. Braided channels characteristic of sediment-rich streams are visible in the new observations. This reinforces the interpretation that these geologically young gullies formed at least in part from erosion by flowing water. Original discovery of the many geologically young gullies on Martian slopes was by Dr. Michael Malin of Malin Space Science Systems, San Diego.